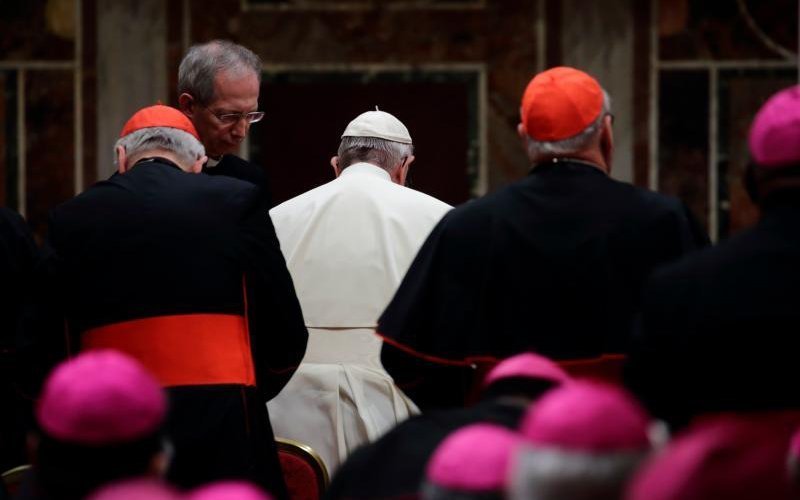 Pope Francis and prelates from around the world attend a penitential liturgy during a meeting on the protection of minors in the church at the Vatican in this Feb. 23, 2019, file photo. (CNS photo by Evandro Inetti, pool)

Vatican: Secrecy of confession must never be violated

VATICAN CITY (CNS) — Pope Francis has abolished the obligation of secrecy for those who report having been sexually abused by a priest and for those who testify in a church trial or process having to do with clerical sexual abuse.

“The person who files the report, the person who alleges to have been harmed and the witnesses shall not be bound by any obligation of silence with regard to matters involving the case,” the pope ordered in a new “Instruction On the Confidentiality of Legal Proceedings,” published Dec. 17.

In an accompanying note, Bishop Juan Ignacio Arrieta, secretary of the Pontifical Council for Legislative Texts, said the change regarding the “pontifical secret” has nothing to do with the seal of the sacrament of confession.

“The absolute obligation to observe the sacramental seal,” he said, “is an obligation imposed on the priest by reason of the position he holds in administering the sacrament of confession and not even the penitent can free him of it.”

The instruction was published by the Vatican along with changes to the already-updated “Sacramentorum Sanctitatis Tutela” (“Safeguarding the Sanctity of the Sacraments”), the 2001 document issued by St. John Paul II outlining procedures for the investigation and trial of any member of the clergy accused of sexually abusing a child or vulnerable adult or accused of acquiring, possessing or distributing child pornography.

In the first of the amendments, Pope Francis changed the definition of child pornography. Previously the subject was a person under the age of 14. The new description of the crime says, “The acquisition, possession or distribution by a cleric of pornographic images of minors under the age of 18, for purposes of sexual gratification, by whatever means or using whatever technology.”

In describing the procedural norms for how the tribunal of the Congregation for the Doctrine of the Faith is to be composed and conducted, Pope Francis has removed the requirement that the legal representative of the accused be a priest. The law now reads: “The role of advocate or procurator is carried out by a member of the faithful possessing a doctorate in canon law, who is approved by the presiding judge of the college.”

But the abolition of the pontifical secret over the entire Vatican process is the greatest change made. And, not only are victims and witnesses free to discuss the case, the amended law specifies that the still-in-effect obligation of Vatican officials to maintain confidentiality “shall not prevent the fulfillment of the obligations laid down in all places by civil laws, including any reporting obligations, and the execution of enforceable requests of civil judicial authorities.”

Archbishop Charles Scicluna, adjunct secretary of the Congregation for the Doctrine of the Faith and the Vatican’s chief abuse investigator, told America Magazine the new law makes clear that “anybody who discloses misconduct or a crime and anybody who is impacted by the misconduct or the crime, and the witnesses, should never be subject to a vow or a promise of silence on the fact that they have reported.”

The new law, he said, explicitly states people’s “moral duty” to cooperate with civil authorities in reporting and investigating the crime of abuse. “Moreover, there is an obligation not to bind people who disclose misconduct or crimes by any promise or vow of silence,” he explained.

In a separate interview with Vatican News, Archbishop Scicluna described as an “epochal change” the pope’s decision to drop the “pontifical secret” — the highest level of confidentiality. “That means, of course, the question of transparency now is being implemented at the highest level,” he said.

The new rules do not mean that documents from Vatican abuse investigations and trials will be made public, he said, but “they are avalable for authorities, or people who are interested parties, and authorities who have a statutory jurisdiction over the matter.”

In the past, when a government or court asked the Vatican for information on a case, the response usually was that the material was covered by “pontifical secret.” Now, Archbishop Scicluna said, once “all the formalities of international law” are fulfilled, communication with other authorities “and the sharing of information and documentation are facilitated.”

In September 2017, members of the Pontifical Commission for the Protection of Minors asked Pope Francis to reconsider Vatican norms maintaining the imposition of “pontifical secret” in the church’s judicial handling of clerical sex abuse and other grave crimes.

The secret ensures cases are dealt with in strict confidentiality. Vatican experts have said it was designed to protect the dignity of everyone involved, including the victim, the accused, their families and their communities.

But when Pope Francis called the presidents of the world’s bishops’ conferences to the Vatican for a summit on the abuse crisis in February, victims and experts alike urged a revision of the policy.

Linda Ghisoni, a canon lawyer and undersecretary for laity at the Dicastery for Laity, the Family and Life, told the summit removing the pontifical secret from abuse cases would reverse a situation or the impression of a situation where secrecy “is used to hide problems rather than protect the values at stake,” including the confidentiality of the victims and the right of an accused to a fair trial.

Cardinal Reinhard Marx of Munich and Freising, Germany, told the summit that removing the pontifical secret would promote transparency in a scandal where the lack of transparency has meant “the rights of victims were effectively trampled underfoot and left to the whims of individuals.”

In his commentary, Bishop Arrieta noted that already in May with the publication of “Vos Estis Lux Mundi” (“You are the light of the world”) on procedures for handling allegations of abuse or of the cover-up of abuse, Pope Francis already banned imposing confidentiality agreements on victims.

The bishop also took pains to note that the abolition of absolute secrecy — the “pontifical secret,” which is invoked with an oath — was not the same thing as removing all obligations for confidentiality.

The “secrecy of the office” still applies to Vatican officials and others involved in an investigation or trial of a cleric accused of abuse or of a bishop or religious superior accused of cover-up. Except for sharing information with civil authorities, the basic professional secrecy serves, as the new law says, to protect “the good name, image and privacy of all persons involved.”