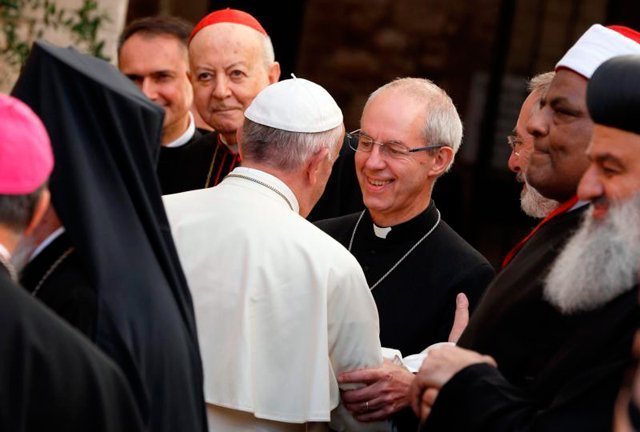 Pope Francis exchanges greetings with Anglican Archbishop Justin Welby of Canterbury, England, spiritual leader of the Anglican Communion, as he arrives for an interfaith peace gathering at the Basilica of St. Francis in Assisi, Italy, Sept. 20. The peace gathering marks the 30th anniversary of the first peace encounter in Assisi in 1986.
By Carol Glatz
Catholic News Service
VATICAN CITY (CNS) — Humanity should feel ashamed it can wage war, kill the innocent, bomb cities and prevent food and medicine from reaching survivors, Pope Francis said.
"There is no god of war," he said.
Violence and division are the work of the devil who "wants to kill everyone," and that is why people need to come together and pray for peace, united in the conviction that "God is a God of peace," he said Sept. 20, a world day of prayer for peace.
Just a few hours before heading to an interreligious gathering in the Italian town of Assisi, Pope Francis dedicated his homily to peace during morning Mass in the chapel of his residence. The pope and some 450 religious leaders from around the world were marking the 30th anniversary of the first interreligious meeting and prayer for peace organized by St. John Paul II in 1986.
Men and women representing the world’s religions were going to Assisi, "not to put on a show, but simply to pray and pray for peace," Pope Francis said in his morning homily.
The world is at war and suffering, and no one can remain indifferent to that, he said, quoting the last verse of the day’s first reading from the Book of Proverbs: "He who shuts his ear to the cry of the poor will himself also call and not be heard."
"If we today shut our ear to the cry of these people who suffer being bombed, who suffer exploitation by arms traffickers, it could be that when it’s our turn no one will respond to us," he said.
Perhaps "we don’t see" war personally or "we get frightened" by an act of terrorism, he said. But none of that can compare to what is happening in some parts of the world "where day and night, the bombs fall and fall … killing children, the elderly, men and women."
War, in fact, really isn’t that far away at all, he added. "War touches everyone" because "war begins in the heart."
The pope prayed that God would "give us peace in our heart, eliminate every urge for avarice, greediness, conflict." He prayed that people’s hearts would be the hearts of men and women of peace and that they would be able to see beyond religious differences "because we are all children of God."
While he and the leaders were praying in Assisi, he asked that everyone pray and "feel shame. Shame for this: that human beings, our brothers and sisters, are capable of doing this," of killing and wounding others and carrying out bombing campaigns that prevent the delivery of needed food and medicine. Think of the children and elderly, he said, who are "starving and ill."
The Assisi peace day, he said, is a day of prayer, penance and "weeping for peace," a day to hear the cry of the poor, which opens the heart to mercy and love, and "saves us from self-centeredness."
Copyright © 2022 Catholic News Service, Inc. All rights reserved. Linking is encouraged, but republishing or redistributing, including by framing or similar means, without the publisher's prior written permission is prohibited.