Pope: Live the Gospel by treating others as a brother or sister - Catholic Courier 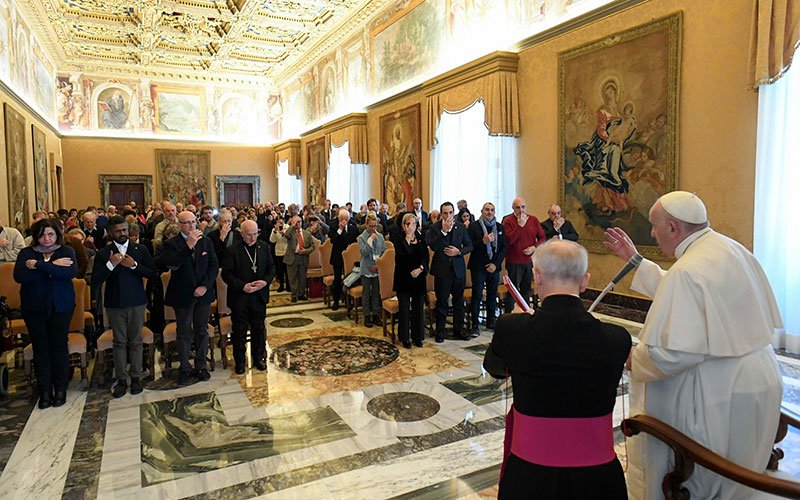 Pope Francis gives his blessing to members of FOCSIV, a federation of mostly Italy-based Catholic volunteer organizations that work internationally, at the end of an audience in the Consistory Hall of the Apostolic Palace at the Vatican Nov. 14, 2022. (CNS photo by Vatican Media)

ATICAN CITY (CNS) — Treating everyone as a brother or sister is the clearest, most simple way to live the Gospel each day, Pope Francis said.

“It is an invitation without exclusion: brothers and sisters all in humanity and love,” the pope wrote in a message to members of FOCSIV, a federation of mostly Italy-based Catholic volunteer organizations that work internationally.

Representatives of the federation met the pope at the Vatican Nov. 14 as part of their celebration of the organization’s 50th anniversary. Twenty organizations founded the group in 1972; today it includes 94 organizations working in 80 countries.

Ivana Borsotto, the group’s president, told Pope Francis, “We seek to be a neighbor in the most abandoned peripheries, in the most remote villages, in the most inhumane prisons, along the cruelest migratory routes, in the most crowded refugee camps and in war-torn countries.”

In his prepared text, Pope Francis said development work, like what FOCSIV members promote in many of the world’s poorest countries, is the only real response to concerns about migration.

“Think of how many young people today are forced to leave their land in search of a dignified existence; how many men, women and children face inhumane journeys and violence of all kinds in order to seek a better tomorrow; how many continue to die on the routes of despair, while their fate is discussed or we turn away,” the pope wrote.

“Forced migration — to escape war, hunger, persecution or climate change — is one of the great evils of this age,” he wrote, and “we will only be able to address at its root by ensuring real development in every country.”

At the audience, Pope Francis asked Borsotto to deliver his prepared text to the members, but said he wanted to speak more about what was in his heart.

Volunteering is a characteristic of Italians and something not as common elsewhere, he told them. “It is one of the most beautiful things” because it involves making a free choice to go out and personally help someone in need.

But it also involves meeting someone, listening to them and sharing with them, he said.

“We are living in a civilization of confrontation,” he said, and wars are just one sign of it.

“One clash after another and we never learn — not on a world level and not on a personal level,” Pope Francis said.

People even seem to define themselves by their opposition to someone or some idea, he said. It’s like they say, “‘I don’t know who I am, but I am against this and against that.’ Their identity is being-against, clashing.”

But, he said, volunteering is “an ode to fraternity” and to recognizing that no matter the differences of culture or opinion, all people are brothers and sisters.