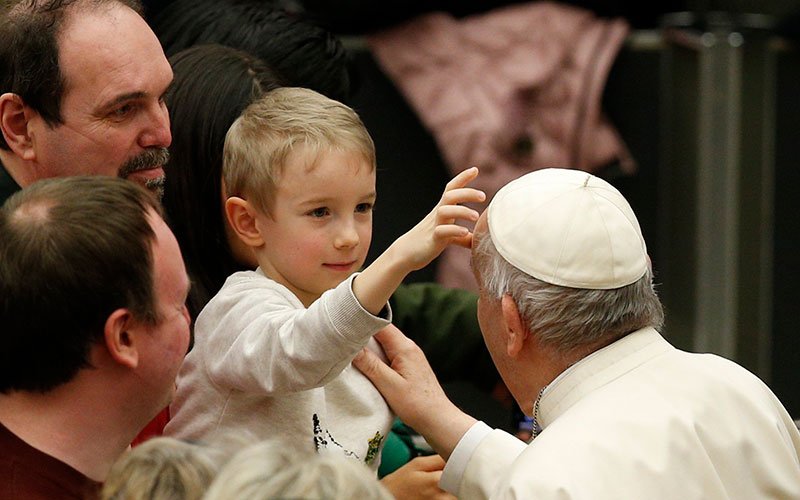 A boy touches Pope Francis' head during the general audience in the Paul VI hall at the Vatican March 2, 2022. (CNS photo by Paul Haring)

Pope: Alliance between young and old must be renewed

VATICAN CITY (CNS) — Coexistence between older and younger generations can bring about a better appreciation for life that is often lost in today’s fast-paced society, Pope Francis said.

A pervasive “spirit of rejection” exists in the modern world that “tends to be hostile to the elderly and, not by chance, also to children” and “casts them aside,” the pope said March 2 during his weekly general audience.

“The excess of speed puts us in a centrifuge that sweeps us away like confetti,” he said. “One completely loses sight of the bigger picture,” and instead is tossed about by an attitude dictated by market forces “for which slower pace means losses and speed is money.”

The pope continued his new series of talks dedicated to the meaning and value of old age and reflected on the theme, “Longevity: symbol and opportunity.”

The long life of the patriarchs recorded in the Bible, he said, “confers a strong, a very strong symbolic meaning to the relationship between longevity and genealogy.”

The Bible, he said, describes how “mutual support among generations is indispensable in order to decipher experiences and confront the enigmas of life.”

However, today, “the excess of speed, which now obsesses every stage of our life, makes every experience more superficial and less nourishing.”

“Young people are unconscious victims of this split between the time on the clock, which must be rushed, and the times of life that require a proper ‘leavening,'” he said. A long life gives a person time to value the processes that take time and to see the “damages of haste.”

For this reason, the pope continued, the “slower pace” of old age helps young people and adults discover the true meaning of life and “makes everyone’s existence richer in humanity.”

A young person “who is not bonded to his or her roots, which are the grandparents, does not receive the strength, like the tree, the strength of the roots, and grows up badly, grows up ailing, grows up without points of reference,” he said.

Greater life expectancy today, he said, should be welcomed as an opportunity to re-forge the covenant between young and old and help everyone understand “the meaning of life in its entirety.”

“The meaning of life is all of it, from birth to death, and you should be able to interact with everyone, and also to have emotional relationships with everyone, so that your maturity will be richer and stronger,” the pope said.