Pope: Look to Christ, not the law, to receive new life - Catholic Courier 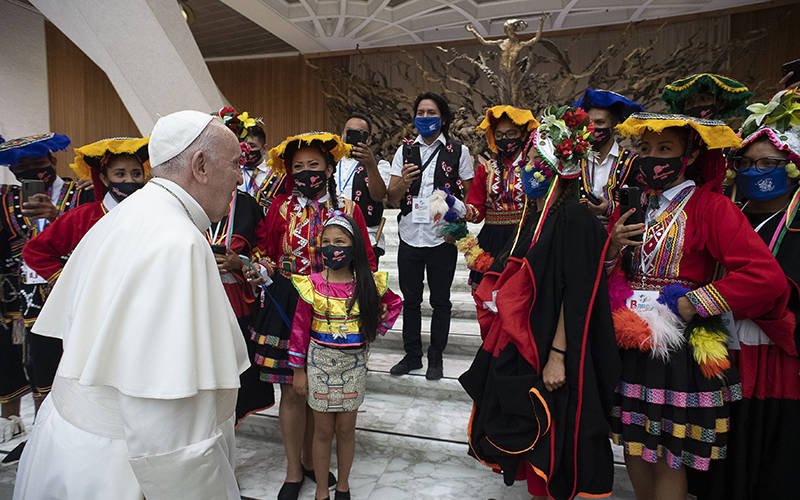 VATICAN CITY (CNS) — What made Christian life radically new was the call for those who have faith in Jesus Christ to live in the Holy Spirit, who liberates from the law God handed down to Moses, Pope Francis said during his weekly general audience.

Mosaic law was necessary and important to follow at that time in history, but it served as a path to follow toward an eventual encounter with Christ and his commandment of love, he said Aug. 11 to those gathered in the Paul VI audience hall at the Vatican.

The pope continued with his series of talks reflecting on St. Paul’s Letter to the Galatians, focusing on the apostle answering the question, “Why, then, the law” if, after all, “there is the Holy Spirit and if there is Jesus who redeems us?”

“The law is a journey” and it acts like a teacher that takes people by the hand, leading them forward, toward an encounter with Jesus and having faith in Christ, he said.

God gave Moses the law to prepare his people on this journey during a time of rampant idolatry and to help his people guide their behavior in a way that showed and expressed their faith and covenant with God, he said.

However, he said, the law was not the covenant; the covenant came first with Abraham, hundreds of years before Moses, the pope said. The covenant was based not on the observance of the law, but on faith in the fulfilment of God’s promises, he said.

St. Paul needed to clarify the role of the law to the Galatians because there were “fundamentalist missionaries” among them who seemed almost “nostalgic” about observing Mosaic law, believing that adhering to the covenant also included observing the Mosaic law, he said.

The apostle explains that, “in reality, the covenant and the law are not linked indissolubly,” the pope said. “The first element he relies on is that the covenant established by God with Abraham was based on faith in the fulfillment of the promise and not on the observance of the law that did not yet exist.”

“Having said this, one should not think, however, that St. Paul was opposed to the Mosaic law” because he does defend its divine origin and says it has “a well-defined role in the history of salvation,” the pope said.

“The law, however, does not give life, it does not offer the fulfillment of (God’s) promise, because it is not capable of being able to fulfill it. Those who seek life need to look to the promise and to its fulfillment in Christ,” he said.

This was the problem — when people put more importance on observing the law than with encountering Christ, he said.

This passage of St. Paul to the Galatians “presents the radical newness of the Christian life: All those who have faith in Jesus Christ are called to live in the Holy Spirit, who liberates from the law and, at the same time, brings it to fulfillment according to the commandment of love,” he said.

Addressing people after the main audience talk, Pope Francis told French-speaking visitors that it was “with great sorrow” that he learned of the Aug. 6 murder of the 60-year-old Montfort Father Olivier Maire.

“I extend my condolences to the religious community of the Monfortians in Saint-Laurent-sur-Sèvre in Vendée, to his family and to all Catholics in France,” he said, assuring everyone of his closeness.

Visitors were required to wear face masks, but not present a so-called “green pass” of proof of vaccination, of a negative COVID-19 test or of recovery from COVID-19.

Italy recently passed a decree as part of ongoing measures to curb the spread of the virus, by making it obligatory for anyone over the age of 12 to show a “green pass” for certain activities, including to eat indoors at restaurants, enter gyms or movie theaters, visit museums, including the Vatican Museums, and, starting in September, to attend school on-site.

The Italian bishops’ conference published a note July 26 saying the pass was not required for going to Mass or joining in processions, but health measures such as wearing masks and social distancing would be continuing. The green pass was required for people entering church-owned or church-operated movie theaters, museums, restaurants and coffee bars, sporting events, conferences, indoor swimming pools, gyms, social centers and reception venues.