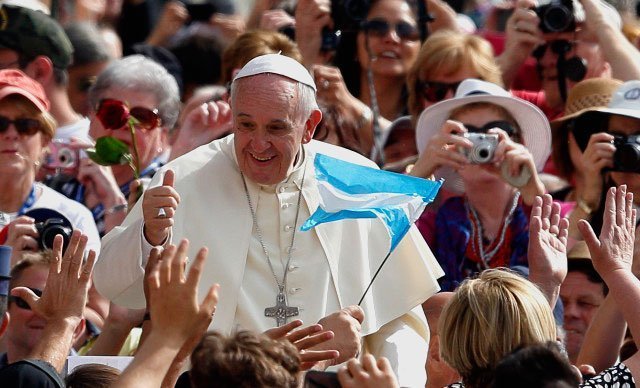 Argentina’s flag is seen as Pope Francis arrives to lead his general audience.

Marriage is an act of faith between a man and woman who are both fragile and limited, but courageous enough to follow Christ and seek to love each other as he loves them, the pope said May 6 during his general audience in St. Peter’s Square.

"Men and women, courageous enough to carry this treasure in the ‘earthen vessels’ of our humanity, are an essential resource for the church and for the whole world," he said. "May God bless them a thousand times for this!"

The pope continued a series of talks about the family by focusing on the beauty of Christian marriage as a sacrament that builds up the church and the world.

Just as Christ loves his church, every husband, too, must love his wife and give himself completely for her, he said.

Looking up from his text, the pope asked all of the married men in the crowd if they fully grasped what was being asked of them. Such responsibility and a commitment to offer so much love and dignity to a woman "is no joke, you know; it’s serious," he said to applause.

While the analogy between husband-wife and Christ-church may be imperfect, he said, its spiritual significance is "revolutionary, and simple at the same time, and within the means of every man and woman who trust in God’s grace."

This love has been inscribed by God in the human creature, "and with Christ’s grace, countless Christian couples, even with their limits, their sins, have achieved" it, the pope said.

The selfless, reciprocal, fruitful and indissoluble union between a man and a woman is part of God’s original plan and "the sacrament of marriage is a great act of faith and of love," he said.

Marriage "gives witness to the courage to believe in the beauty of the creative act of God and to live that love that drives one to always go beyond, beyond oneself and beyond one’s own family," he said.

"The Christian vocation to love without reserve and without measure is what, with Christ’s grace, is at the foundation of the free consent that constitutes marriage," the pope said.

The pope said the church is intimately bound up in every Christian marriage and it is edified with each union’s "successes" and suffers with every failure.

"But we must ask ourselves in all seriousness: Do we fully accept — we as faithful and pastors, too — this indissoluble connection between the relationship of Christ and the church with the relationship of marriage and the human family? Are we willing to seriously take on this responsibility? That is, that every marriage takes the path of the love Christ has for the church? This is something huge."

Such a path takes courage, and that is why whenever "I greet newlyweds, I say, ‘Look, the courageous ones!’ Because you need courage to love each other as Christ loves the church," he said to applause.

At the end of the audience, the pope noted May 8 marked the 70th anniversary of the end of World War II in Europe.

He said he hoped humanity would "learn from past mistakes."

Given the "current conflicts that are tearing apart" certain parts of the world, the pope asked all leaders to commit themselves to "seeking the common good and promoting a culture of peace."

Among the tens of thousands of faithful present in St. Peter’s Square was a large group of Chinese Catholics from the Diocese of Wenzhou.

The pope met with them before the start of the audience after he gave indications to Vatican security to deviate the popemobile’s usual route through the square and head to where the group was standing, sending a few undercover Swiss Guards scurrying when the vehicle did not take its expected turn.

The pope descended from the popemobile to greet members of the large and enthusiastic group of pilgrims who waved Chinese and Vatican flags. They vigorously shook the pope’s hands or grabbed at him while he smiled and blessed a few babies.

Also in the audience was a uniformed delegation from the Harlem Globetrotters basketball team.

The text of the pope’s audience remarks in English is available online at www.vatican.va/holy_father/francesco/audiences/2015/documents/papa-francesco_20150506_udienza-generale_en.html.

The text of the pope’s audience remarks in Spanish is available online at www.vatican.va/holy_father/francesco/audiences/2015/documents/papa-francesco_20150506_udienza-generale_sp.html.