Pope meets Cardinal Pell, thanks him for his 'witness' - Catholic Courier 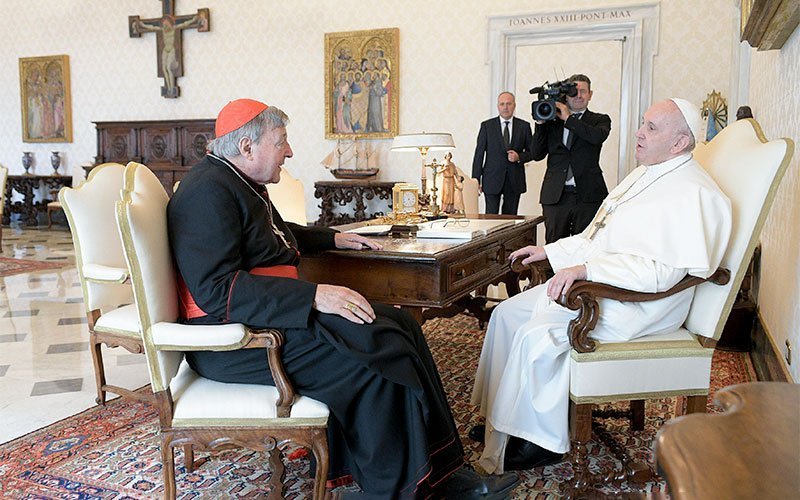 Pope Francis talks with Australian Cardinal George Pell, former prefect of the Vatican Secretariat for the Economy, during an audience at the Vatican Oct. 12, 2020. (CNS photo by Vatican Media)

VATICAN CITY (CNS) — “Thank you for your witness,” Pope Francis told retired Australian Cardinal George Pell as the two sat down for a private meeting Oct. 12, six months after the High Court of Australia overturned the cardinal’s conviction on sex abuse charges.

“More than a year,” the pope could be heard saying to Cardinal Pell in a brief video released by Vatican News.

The pope’s comments likely were a reference to the 405 days the 79-year-old cardinal spent in jail after being convicted on five counts related to the abuse of two choir boys.

In a decision read April 7, the High Court overturned that conviction, concluding there was “a significant possibility that an innocent person has been convicted because the evidence did not establish guilt to the requisite standard of proof.”

A few hours later, the cardinal was released from prison.

Cardinal Pell, former prefect of the Vatican Secretariat for the Economy, arrived in Rome Sept. 30, more than three years after he had left Rome to face charges in Australia.

Cardinal Pietro Parolin, Vatican secretary of state, had told reporters Oct. 1 that it was Cardinal Pell’s decision to come to Rome, where he still has an apartment, and that Pope Francis was not thinking of giving the Australian prelate a new position.

Cardinal Parolin also denied that Cardinal Pell’s return had anything to do with the forced resignation of Cardinal Angelo Becciu, who had served from 2011 to 2018 as “sostituto” — a position like chief of staff — in the Vatican Secretariat of State, where he had control and oversight over certain Vatican funds.

At a press briefing with journalists Sept. 25, the day after his forced resignation, Cardinal Becciu said he and Cardinal Pell had “professional differences because I saw things one way, and he saw them another way.”

In fact, Cardinal Becciu said, at one meeting in the presence of Pope Francis, Cardinal Pell “silenced me, saying, ‘You are a dishonest person.’ And it was there I lost my patience.”

The day after Cardinal Becciu’s ouster, Cardinal Pell released a statement saying, “The Holy Father was elected to clean up Vatican finances. He plays a long game and is to be thanked and congratulated on recent developments.”