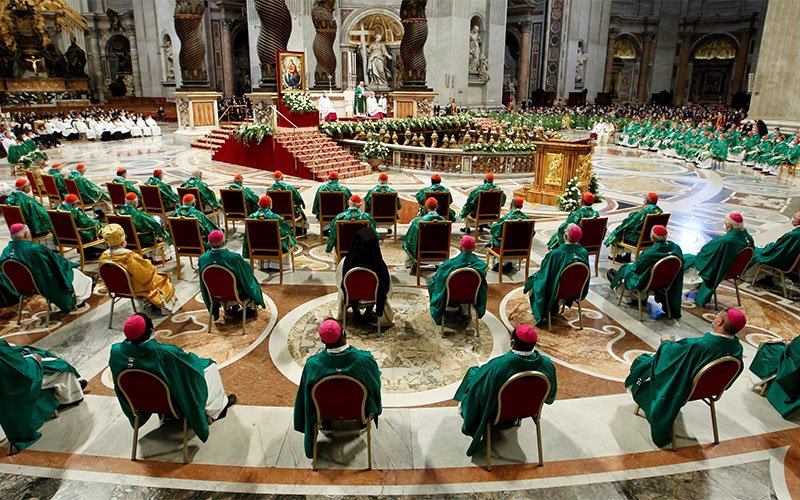 Pope Francis celebrates a Mass to open the listening process that leads up to the assembly of the world Synod of Bishops in 2023, in St. Peter's Basilica at the Vatican in this Oct. 10, 2021, file photo. On Oct. 2, 2022, Pope Francis heard syntheses from the listening phase of the 2023 synod. (CNS photo by Remo Casilli/Reuters)

VATICAN CITY (CNS) — Pope Francis personally expressed his thanks to the four dozen people who read through hundreds of reports about the listening phase of the Synod of Bishops and, after 12 days of prayer, reflection and discussion, drafted a working document for the continental stage of the synod process.

The pope welcomed the cardinals, bishops, priests, religious and lay participants to the Vatican Oct. 2, the last day of their work.

At the heart of the work were the 112 syntheses submitted by national bishops’ conferences from around the world, as well as syntheses from the Eastern Catholic churches, religious orders, church organizations and movements, offices of the Roman Curia and individuals. Each of the 25 people appointed to the drafting committee read a dozen reports before joining the others in Frascati, outside of Rome, Sept. 21.

“We come to you at the end of a unique and extraordinary ecclesial experience that has made us aware of the richness of the fruits that the Spirit is awakening in the holy people of God,” Cardinal Mario Grech, secretary-general of the Synod of Bishops, told Pope Francis, according to the synod office.

“We truly feel a sense of awe at the wonders God is working in his church,” the cardinal said. And, returning home, members of the drafting group “will be able to say that the church offers itself as a home for all, because the experience of synodality that we are living leads us to ‘widen the space of the tent’ to truly welcome everyone.”

Neither the Vatican press office nor the synod office said whether the pope made any remarks to the group.

Prior to writing the first draft, participants met in a succession of small groups ordered, for example, by geographic region or ecclesial status. They even spent time in all-male or all-female working groups, identifying key themes in the national reports, praying about voices that seemed to be missing and noticing tensions or suggestions.

After reading, discussing and correcting the draft, they were joined by the bishops who are members of the Ordinary Council of the Synod of Bishops. The council approved the document, which will be published in late October, according to the synod general secretariat.

The document will be the subject of prayer and discussion at continental assemblies, which are scheduled to be held between January and March 2023.

According to the synod office, “The intent of the continental stage is to deepen our discernment on what has emerged from the previous stage of local and national listening, with the aim of formulating open questions more accurately and to better substantiate and flesh out the insights coming from the local churches.”

Although they are being called “continental assemblies,” the gatherings are more aligned with regional bishops’ conferences. Six assemblies — which are to include bishops, priests, religious and laypeople — are planned: Europe; Latin America and the Caribbean; Africa and Madagascar; Asia; Canada and the United States; and the Middle East, including the Eastern Catholic churches.