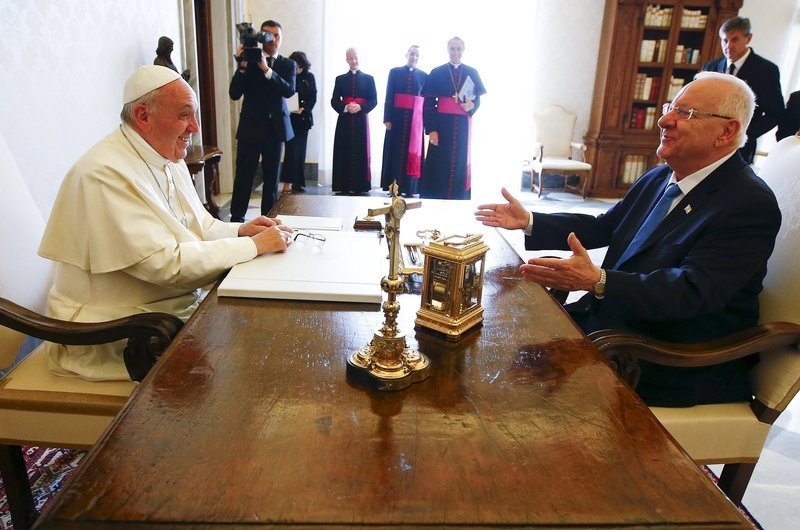 Pope Francis talks with Israeli President Reuven Rivlin during a private audience in the pontiff's private library at the Vatican Sept. 3.
By Cindy Wooden
Catholic News Service
VATICAN CITY (CNS) — As Catholics joined others in protesting Israel’s extension of its security wall, further dividing Palestinians and Israelis, Pope Francis gave Israeli President Reuven Rivlin a tangible sign of his hopes for peace.
The pope’s new peace medal — replacing one depicting “the Angel of Peace” — is a bronze circle split in two with an olive branch growing up the middle.
A band around the entire medal reads, in Italian, “Seek what unites. Overcome what divides.”
“There is division,” the pope told Rivlin Sept. 3. “The challenge is to unite.”
Rivlin gave the pope a rough basalt copy of an inscribed slab. The original was dated to the 9th century B.C. and includes what Rivlin said was the earliest reference to King David outside the Bible. “I thought it was right to give you this gift to recall the common origins of Christianity and Judaism,” he told the pope.
Pope Francis and Rivlin met privately for 30 minutes. The Vatican said their conversation and the president’s subsequent meeting with officials of the
Vatican Secretariat of State “focused on the political and social situation in the Middle East, affected by several conflicts, with special attention to the condition of Christians and other minority groups.”
“The need and urgency of promoting a climate of trust between Israelis and Palestinians was highlighted, along with the resumption of direct negotiations with the aim of reaching an agreement respecting the legitimate aspirations” of both the Israelis and Palestinians, the statement said.
In addition, it said, the hope was express “that an adequate solution be found for various matters of common interest, including the situation of Christian schools in the country.”
Israel’s Education Ministry has been urging Christian and other private schools to become part of the state school system and adopt the national curriculum. The ministry has been cutting funds to the schools and has limited the amount of tuition they may charge, forcing many of them into serious financial difficulties.
Copyright © 2023 Catholic News Service, Inc. All rights reserved. Linking is encouraged, but republishing or redistributing, including by framing or similar means, without the publisher's prior written permission is prohibited.