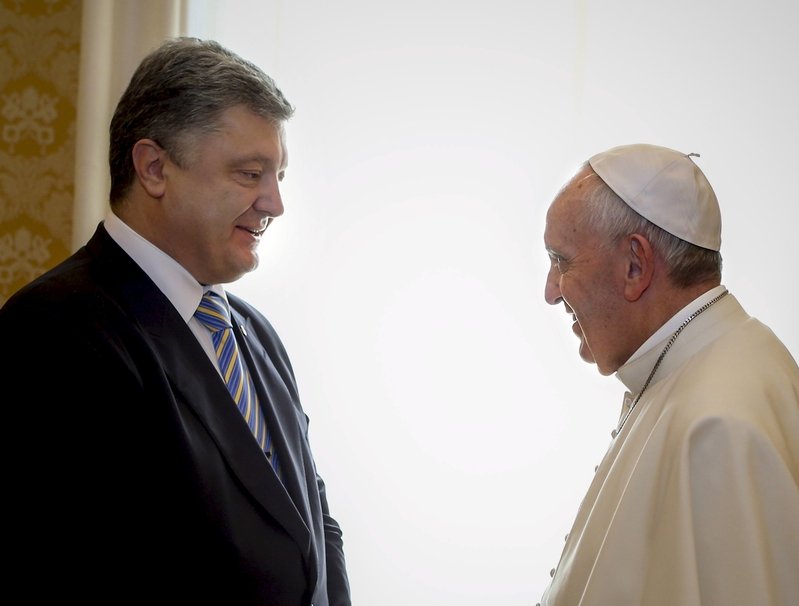 Pope Francis meets with Ukrainian President Petro Poroshenko at the Vatican Nov. 20.
By Junno Arocho Esteves
Catholic News Service
VATICAN CITY (CNS) — Although the conflict between Ukraine and Russian-backed separatists continues, Pope Francis and Ukrainian President Petro Poroshenko still share hope that a political solution still can be found, the Vatican said.
Welcoming Poroshenko to the Vatican Nov. 20, the pope greeted him in Ukrainian. Jesuit Father Federico Lombardi, Vatican spokesman, explained that at the age of 11, the young Jorge Mario Bergoglio learned a few phrases of Ukrainian when he served as an altar boy for a Ukrainian Catholic priest in Buenos Aires.
Pope Francis and Poroshenko spoke privately for more than 20 minutes. The Vatican said that their conversation was "dedicated principally to matters connected with the situation of conflict in the country."
"In this respect, the hope was shared that, with the commitment of all the interested parties, political solutions may be favored, starting with the full implementation of the Minsk Accords," a cease-fire agreement signed in September 2014, the statement said.
Additionally, the two expressed their concerns regarding the difficulties in providing humanitarian relief, healthcare in areas of the country where the fighting continues.
The Ukrainian president gave the pope a glass sculpture of an angel, which represented "a messenger of God who brings peace to every home and reminds us of such principal values of life as God’s blessing, family, labor and peaceful skies overhead."
Poroshenko told the pope he hoped "that with this you will remember Ukraine."
Pope Francis gave the president a gift he said represented his "desire for hope in Ukraine": a bronze medallion with an image of an olive branch holding two stones together. He also gave Poroshenko a copy of his apostolic exhortation, "The Joy of the Gospel," and a copy of his encyclical on the care of creation, "Laudato Si’."
After their meeting, Poroshenko met privately with Cardinal Pietro Parolin, Vatican secretary of state, and with Archbishop Paul Gallagher, Vatican foreign minister.
Copyright © 2022 Catholic News Service, Inc. All rights reserved. Linking is encouraged, but republishing or redistributing, including by framing or similar means, without the publisher's prior written permission is prohibited.