Pope: Mercy is a way of life - Catholic Courier 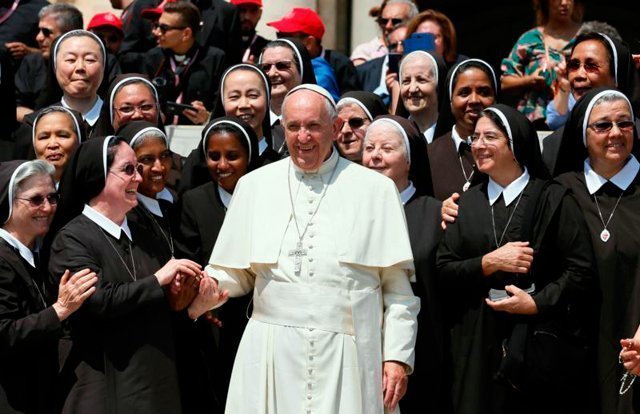 Pope Francis greets nuns during a jubilee audience in St. Peter's Square at the Vatican June 30. The pope was to begin a reduced summer schedule.

VATICAN CITY (CNS) — Mercy is not an abstract concept but a lifestyle that invites Christians to make an examination of conscience and ask themselves if they place the spiritual and material needs of others before their own, Pope Francis said.

A Christian who chooses to be merciful experiences true life and has "eyes to see, ears to listen, and hands to comfort," the pope said June 30 during a Year of Mercy audience in St. Peter’s Square.

"That which makes mercy alive is its constant dynamism to go out searching for the needy and the needs of those who are in spiritual or material hardship," he said.

By being indifferent to the plight of the poor and suffering, the pope said, Christians turn into "hypocrites" and move toward a "spiritual lethargy that numbs the mind and makes life barren."

"People who go through life, who walk in life without being aware of the needs of others, without seeing the many spiritual and material needs are people who do not live," he said. "They are people who do not serve others. And remember this well: One who does not live to serve, serves nothing in life."

Instead, he continued, those who have experienced the mercy of God in their own lives do not remain insensitive to the needs of others. Far from theoretical issues, the works of mercy are a "concrete witness" that compel Christians to "roll up their sleeves in order to ease suffering."

Pope Francis also called on the faithful to remain vigilant and to focus on Christ present, especially in those suffering due to a globalized "culture of well-being."

Concluding his catechesis, Pope Francis recalled his visit to Armenia June 24-26, thanking the people of Armenia who, throughout their history, "have given witness to the Christian faith through martyrdom."

While thanking Armenian Apostolic Catholics Karekin II for his hospitality, the pope stressed that in making the visit alongside the patriarch, he was reminding Catholics of the importance of strengthening bonds with other Christians as another way "of giving witness to the Gospel and being leaven for a more just and united society."

The late June audience was the last one the pope was scheduled to hold before a reduced summer schedule.