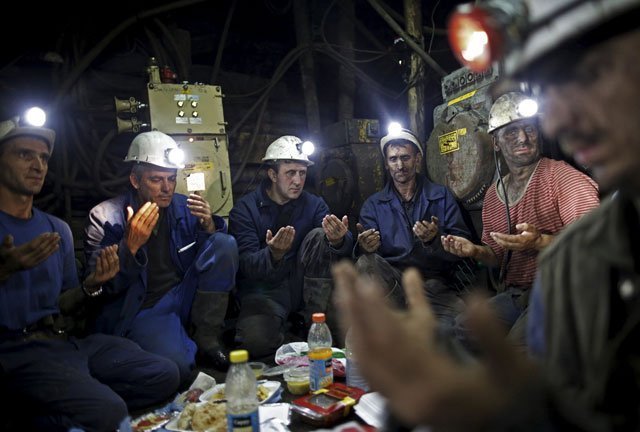 Coal miners pray deep inside the Stara Jama mine in Zenica, Bosnia and Herzegovina, July 15. The entire mining industry must make "radical change" to protect the environment and local communities, Pope Francis says.

VATICAN CITY (CNS) — The mining industry, especially in the world’s poorest countries, must make a "radical change" to respect the rights of local communities and protect the environment, Pope Francis said.

The companies, the governments that are supposed to regulate them, investors and consumers who use the myriad products relying on mined material "are called to adopt behavior inspired by the fact that we are all part of one human family," the pope said.

The Pontifical Council for Justice and Peace, which had sponsored a reflection day in 2013 for two dozen mining company executives and was preparing another session with them in September, was holding a meeting July 17-19 with small organizations working at the grass roots to oppose mining operations in their countries.

Cardinal Peter Turkson, president of the council, said his office could not ignore what Pope Francis, in his encyclical on the environment, called "both the cry of the earth and the cry of the poor."

Italian Comboni Father Dario Bossi, a missionary in northern Brazil and part of an ecumenical coalition representing the rights of communities impacted by mining, told reporters July 17, "Communities in different parts of the world face situations of violence and intimidation, illegality and corruption, pollution and violations of human rights because of activities tied to mining."

When local people protest, he said, the response of the government often is to arrest them, rather than investigate their complaints.

The mining companies that "affirm they want dialogue with the local communities" often are not interested in making any concessions or changes in their operational plans, he said;they just want approval for projects that will bring the local community "few long-term benefits."

Speaking at a Vatican news conference, other representatives from groups in India, Chile and Brazil said mining companies — with the approval of local governments — regularly invade and denude the traditional lands of indigenous peoples and poor farmers, expropriate water used for irrigation and drinking and leave polluted land and water behind.

Pope Francis, in his letter, praised the groups for "echoing the cry of numerous persons, families and communities that suffer directly or indirectly because of the too frequent negative effects of mining."

The groups, he said, "cry for land lost," for the extraction of riches that benefit only the mining companies, for harm to locals’ health and for working conditions that treat local employees little better than slaves.

Theirs, he said, "is a cry of sadness and impotence for the pollution of water, air and soil" and a plea to be consulted when making the terms for new mining projects.