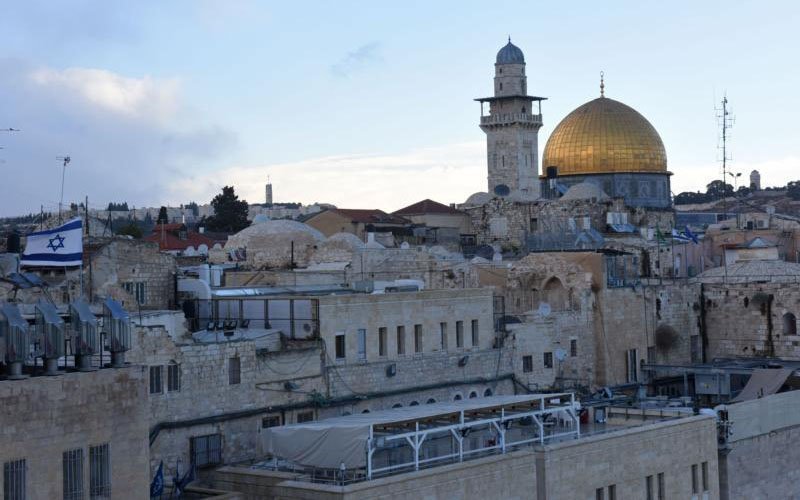 The gold-covered Dome of the Rock at the Temple Mount complex is seen in this overview of Jerusalem's Old City Dec. 6. 2017. (CNS photo by Debbie Hill)

RABAT, Morocco (CNS) — Ten days after U.S. Secretary of State Mike Pompeo’s visit to Jerusalem brought renewed attention to the status of the city, Pope Francis and King Mohammed VI of Morocco pleaded for international recognition of “the unique and sacred character of Jerusalem.”

In a joint declaration signed March 30 at the royal palace in Rabat, the pope and king said they were “deeply concerned” for the city’s “spiritual significance and its special vocation as a city of peace.”

Referring to the city as both Jerusalem and “Al-Quds Acharif,” its Arab name, the two leaders said it was important to preserve the city “as the common patrimony of humanity and especially the followers of the three monotheistic religions, as a place of encounter and as a symbol of peaceful coexistence, where mutual respect and dialogue can be cultivated.”

“It is our hope, therefore, that in the holy city, full freedom of access to the followers of the three monotheistic religions and their right to worship will be guaranteed, so that in Jerusalem, Al-Quds Acharif, they may raise their prayers to God, the creator of all, for a future of peace and fraternity on the earth.”

The statement did not get into questions over political control of the city or even the ongoing international debate about moving other embassies to Jerusalem from Tel Aviv.

The Vatican supports a “two-state solution” for the Holy Land with independence, recognition and secure borders for both Israel and Palestine.

At the same time, the Vatican consistently has called for a special status for Jerusalem, particularly its Old City, in order to protect and guarantee access to the holy sites of Judaism, Christianity and Islam.

Expressing his concern when President Trump announced the U.S. Embassy move in December 2017, Pope Francis said, “Jerusalem is a unique city, sacred to Jews, Christians and Muslims who venerate the holy places of their respective religions, and has a special vocation to peace.”

Since the early 1990s, the Vatican has seen as separate issues the need for a special status for the city and questions over the political sovereignty or control of Jerusalem. The political question, it has insisted, must be the result of negotiation.

The internationally unsettled status of Jerusalem and its central importance to Jews, Muslims and Christians explains why, while recognizing the state of Israel, no nation had its embassy in the holy city.

When Trump changed that, Pope Francis prayed that “wisdom and prudence would prevail, to avoid adding new elements of tension in a world already shaken and scarred by many cruel conflicts.”