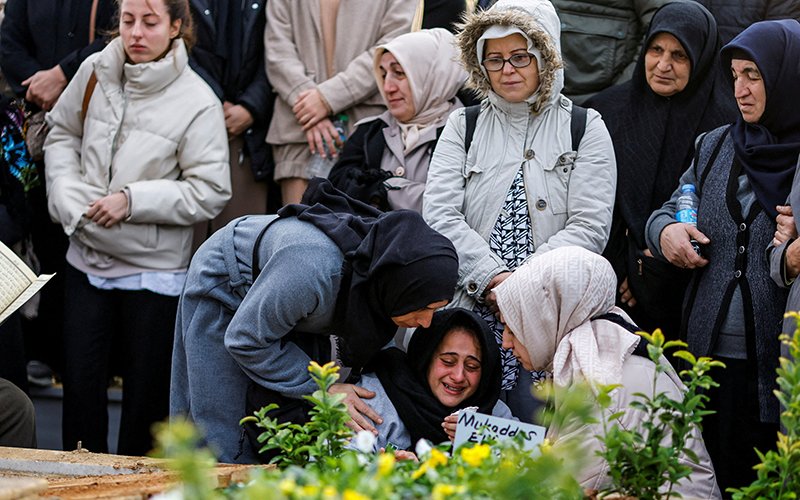 People in Istanbul attend the Nov. 14, 2022, funeral of Mukaddes Elif Topkara and Adem Topkara, two of the six victims of a blast that took place Nov. 13 in a busy shopping district. (CNS photo/Kemal Aslan, Reuters)

VATICAN CITY (CNS) — As authorities in Turkey continued to investigate who was responsible for a deadly bombing in a busy shopping district in Istanbul, Pope Francis prayed for victims and the nation.

“Assuring the injured and those who mourn their loved ones of his spiritual closeness, His Holiness prays that no act of violence will discourage the efforts of the people of Turkey to build a society based on the values of fraternity, justice and peace,” said a telegram, written on behalf of the pope and signed by Cardinal Pietro Parolin, Vatican Secretary of State.

The telegram was sent to Archbishop Marek Solczynski, papal nuncio to Turkey, and published by the Vatican Nov. 15.

“Pope Francis was deeply saddened to learn of the loss of life caused by the explosion in Istanbul on Sunday and he sends condolences to the families and friends of those who have died,” the telegram said.

Authorities in Turkey arrested a female suspect Nov. 14, claiming she had acted on behalf of Kurdish militants.

The Kurdistan Workers’ Party (P.K.K.), a political group and guerilla movement demanding autonomy and increased rights for Kurds in Turkey, denied any connection to the bombing.