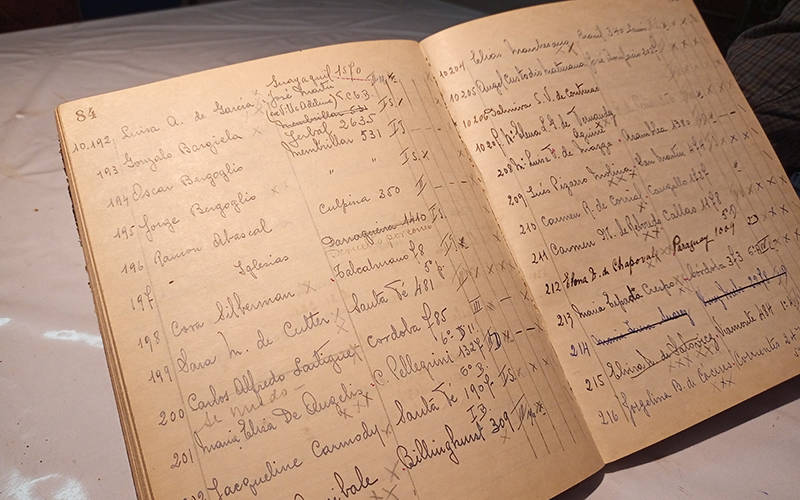 The name Jorge Bergoglio, the future Pope Francis, is seen in this recent photo of a registry for overnight eucharistic adoration at the Basilica of the Blessed Sacrament in Buenos Aires, Argentina. The pope said he was moved by the photo showing his participation in adoration as a young man between 1954 and 1955, when he was 18-19 years old. (CNS photo by Lucas Schaerer)

Pope Francis said he was “moved” by a photo of an old registry that showed his participation as a young man at sessions of overnight eucharistic adoration at a basilica in Buenos Aires, Argentina.

The pope was sent a photo taken by Argentine journalist Lucas Schaerer of the registry from the Basilica of the Blessed Sacrament that featured his name, along with that of his brother Oscar and their neighbor, Gonzalo Bargiela.

In a letter sent to Schaerer and published April 8 in the Spanish Catholic weekly Alfa y Omega, the pope recalled his visits to the basilica between 1954 and 1955. At the time, Jorge Mario Bergoglio was 18-19 years old. He had already had what he called his “San Jose de Flores experience” — the experience of God’s mercy during confession on Sept. 21, 1953 — felt called to priesthood and was living what he described to Schaerer as “a normal Christian life.”

The nocturnal adoration, where participants took turns praying before the Blessed Sacrament throughout the night, had begun at the basilica in 1917. The future pope was registered as the 9,195th person to take part.

Adoration began about 9 p.m. after Spanish Sacramentine Father José Ramón Aristi preached, the pope recalled. “When it was your turn, the person before you would wake you up with the phrase, ‘Venite adoremus’ (‘Come, let us adore him’), and from there you go for an hour of adoration.”

Pope Francis had spoken in the past about his admiration for Father Aristi, his confessor, who died when the future pope was serving as vicar general of the Archdiocese of Buenos Aires.

During a 2014 meeting with parish priests of the Diocese of Rome, the pope recalled paying his last respects to Father Aristi in the crypt of the church where the late priest’s body lay.

After adorning Father Aristi’s coffin with flowers, “I looked at the rosary in his hand. Immediately that robber that is in each of us came out and while I arranged the flowers, I picked up the cross of the rosary and with a little effort, I pulled it off. I looked at him and said, ‘Give me half of your mercy,’” the pope said.

He put the crucifix in his breast pocket and carried it there until his election as pope March 13, 2013. “But a pope’s shirts don’t have pockets,” so now he carries it in a cloth pouch under his cassock. “And when I start having a bad thought about someone, I always put my hand here,” he said, showing the priests where the crucifix is.