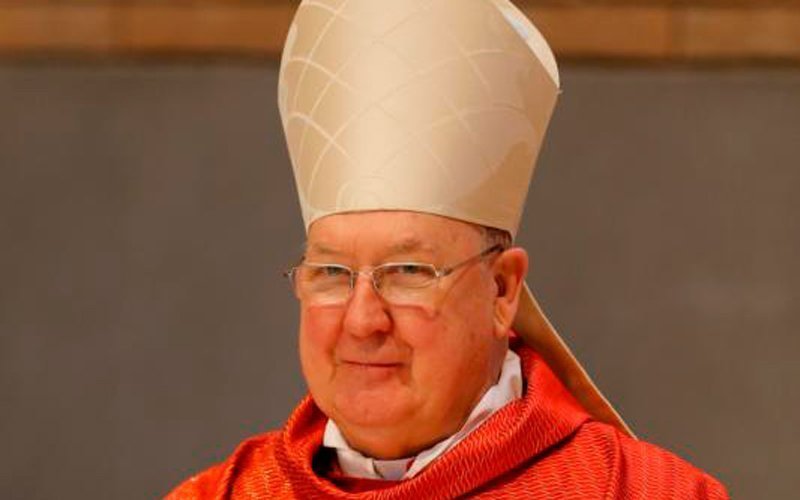 U.S. Cardinal Kevin J. Farrell, prefect of the Vatican's Dicastery for Laity, Family and Life, is pictured during Mass in late January in Rome. Pope Francis has appointed the cardinal as his special envoy for the Dec. 8 dedication of the Trinity Dome at the Basilica of the National Shrine of the Immaculate Conception in Washington.

WASHINGTON (CNS) — Pope Francis has named U.S. Cardinal Kevin J. Farrell, prefect of the Vatican’s Dicastery for the Laity, Family and Life, to be his special envoy at the Dec. 8 dedication of the Trinity Dome at the Basilica of the National Shrine of the Immaculate Conception in Washington.

Washington Cardinal Donald W. Wuerl will celebrate the Mass, which takes place on the feast of the Immaculate Conception, the patronal feast day of the United States and the national shrine. The cardinal, who is chairman of the national shrine’s board of trustees, also will be the homilist for the Mass, which will take place in the Great Upper Church and will be open to the public.

Msgr. Walter R. Rossi, rector of the national shrine, said he and all associated with the shrine, including the staff and Cardinal Wuerl, are honored the pope named a special envoy to the dedication.

“I am delighted that Pope Francis has appointed Cardinal Kevin Farrell to fulfill this role,” Msgr. Rossi said in a statement. “Since his days as a priest of the Archdiocese of Washington, Cardinal Farrell has been a great friend of the national shrine and was ordained a bishop in the Great Upper Church in 2002.”

While he headed the Diocese of Dallas, before his Vatican appointment, then-Bishop Farrell was a member of the national shrine’s board of trustees and served on its finance committee, the priest said.

“Even though Cardinal Farrell is now living and working in Rome, he remains greatly interested and supportive of our ministry here at Mary’s shrine,” Msgr. Rossi added.

Dedication of the Trinity Dome will complete construction of the shrine begun in 1920 “and will truly be an historic moment in the life of this great patronal church of the United States,” Msgr. Rossi said.

The dome project was begun more than a year ago. The artwork being placed in the interior of the dome is a mosaic depicting the Trinity, Mary and 13 saints associated with the United States or the national shrine, the four evangelists and words from the Nicene Creed.

The mosaic work is being done at the Travisanutto Giovanni mosaic company in Spilimbergo, Italy, and is being shipped to the national shrine in 30,000 sections weighing 24 tons and composed of more than 14 million pieces of glass.