Pope: Nothing is impossible for God, not even peace in Ukraine - Catholic Courier 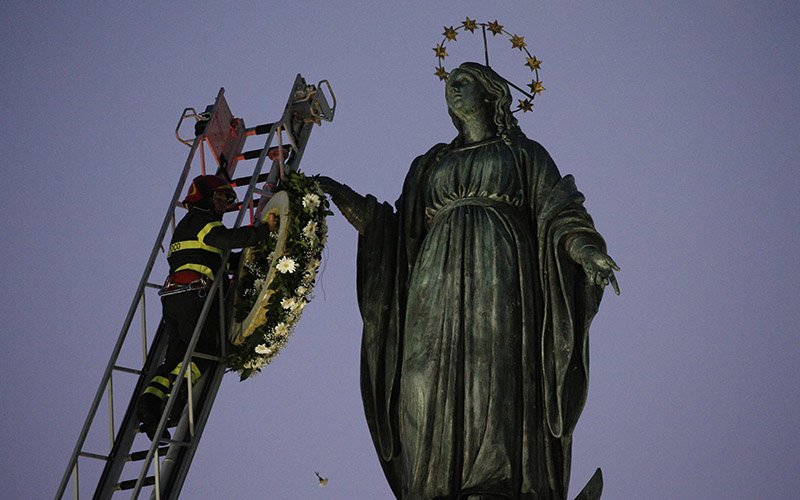 A firefighter places a wreath on a tall Marian statue overlooking the Spanish Steps in Rome Dec. 8, 2022, the feast of the Immaculate Conception. Pope Francis was to pray at the statue later in the day, continuing the papal tradition of visiting the Spanish Steps on the feast of the Immaculate Conception. (CNS photo by Paul Haring)

VATICAN CITY (CNS) — Pope Francis asked Catholics around the world to join him in entrusting to Mary “the universal desire for peace, especially for the martyred Ukraine, which is suffering so much.”

Reciting the Angelus prayer at midday Dec. 8, the feast of the Immaculate Conception, Pope Francis noted the Angel Gabriel’s words to Mary that “nothing will be impossible for God.”

“With God’s help, peace is possible; disarmament is possible,” the pope told people gathered in St. Peter’s Square. “But God wants our goodwill. May Our Lady help us to convert to God’s plans.”

Pope Francis invited people to join him at the Spanish Steps

The pope also invited people to join him late in the afternoon at the Spanish Steps in the center of Rome, where he planned to pay homage to Mary at a statue of the Immaculate Conception after visiting the Basilica of St. Mary Major. The COVID-19 pandemic had forced the cancellation of the public ceremony at the Spanish Steps in 2020 and 2021.

In his Angelus talk at noon, Pope Francis said that while Catholics talk a lot about original sin, they often overlook the “original grace” of baptism, when “God came into our lives and we became his beloved children forever.”‘

The feast of the Immaculate Conception, which celebrates Mary having been conceived without original sin, is a good time to remember that “we sinners, too, have received an initial gift that has filled our life, a good greater than anything, an original grace, of which often, however, we are unaware.”

The feast day is a time to listen to God who says, “‘Son, daughter, I love you and I am with you always, you are important for me, your life is precious,'” the pope said. “When things do not go well and we are discouraged, when we are downcast and risk feeling useless or wrong, let us think about this, about this original grace.”

And, he said, it is a perfect day to remember that Mary will be with each person as he or she tries to fight temptation and to live in the fullness of their baptismal “original grace.”

Ukraine was still on the pope’s mind four hours later when he went to the Spanish Steps in the middle of Rome’s major shopping district, where he was joined by thousands and thousands of tourists and Romans enjoying the feast day public holiday.

Instead of making a speech at the foot of the Marian statue, Pope Francis always recites a prayer he has written for the occasion, summarizing the prayers and needs of the city and its residents, especially those who, like him, leave flowers.

The pope asked Mary also to “see and welcome those invisible flowers” representing “so many invocations, so many silent supplications, sometimes stifled, hidden but not from you, who are mother.”

But the pope started crying and had to pause for a moment after he prayed, “Immaculate Virgin, today I would have liked to bring you the thanksgiving of the Ukrainian people for the peace we have long asked the Lord for.”

Encouraged by the crowed to go on, the pope, sniffling, told Mary, “Instead, again I must present to you the supplication of the children, of the elderly, of the fathers and mothers, of the young people of that martyred land.”

Just as Mary was at the foot of the cross when Jesus was dying, “we all know that you are with them” in Ukraine and everywhere people suffer because of war, Pope Francis said.

Looking to Mary conceived without sin, he said, Christians continue “to believe and hope that hatred will be vanquished by love; that over lies, the truth may prevail; that over offense, forgiveness will win; (and) that over war, peace will be victorious.”