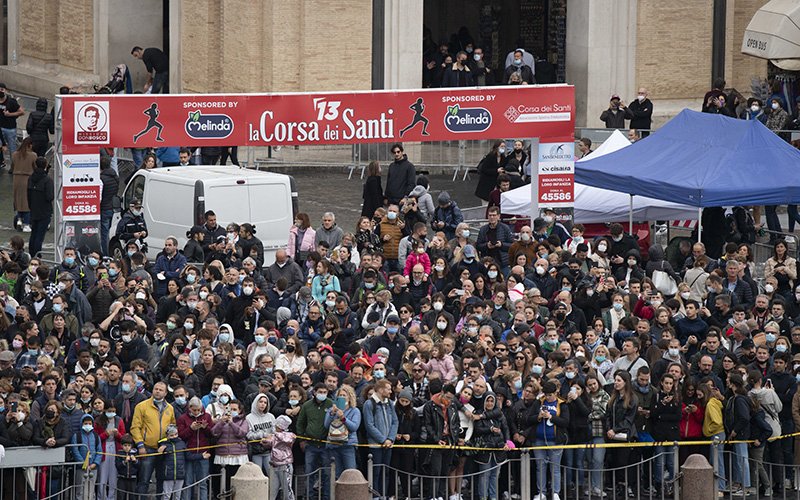 People watch outside St. Peter's Square as Pope Francis leads the Angelus from the window of his studio overlooking the square at the Vatican Nov. 1, 2021, the feast of All Saints. (CNS photo by Vatican Media)

Christian joy is neither a passing emotion nor an optimistic worldview but a sign of holiness that bears witness to God’s love even in the direst circumstances, Pope Francis said on the feast of All Saints.

“The saints, even amid many tribulations, have experienced this joy and have borne witness to it. Without joy, faith becomes a rigorous and oppressive exercise, and risks falling ill with sadness,” the pope said.

Before reciting the Angelus Nov. 1 with pilgrims gathered in St. Peter’s Square, the pope reflected on the Eight Beatitudes, which are the path of “humility, compassion, meekness, justice and peace” laid out by Jesus to show all men and women a way “that leads to the kingdom of God and to happiness.”

The church’s saints, he continued, walked along the path of “joy and prophecy,” which are “two aspects that are proper to this saintly way of life.”

Focusing on joy, Pope Francis explained that achieving holiness is not solely a matter of “effort and renunciation” but instead it is found when people discover that they are “God’s beloved sons and daughters.”

“It is not a human achievement, it is a gift we receive: We are holy because God, who is the Holy One, comes to dwell in our lives,” the pope said. “It is he who gives holiness to us. For this we are blessed!”

Prophecy is another aspect of holiness underlined in the beatitudes, especially when crying out on behalf of “the poor, the afflicted and those who hunger for justice,” he said.

While a worldly mentality can lead one to believe that happiness comes from being “rich, powerful, always young and strong,” Jesus makes a “prophetic proclamation” that holiness can be achieved by “putting his word into practice.”

“Those who believe themselves to be rich, successful and secure base everything on themselves and close themselves off from God and their brothers and sisters, while those who know that they are poor and not self-sufficient remain open to God and to their neighbor. And they find joy,” the pope said.

Pope Francis said the beatitudes are the “prophecy of a new humanity” and a new way of living that would require “making oneself small and entrusting oneself to God, instead of prevailing over others.”

“Holiness is accepting and putting into practice, with God’s help, this prophecy that revolutionizes the world,” he said.