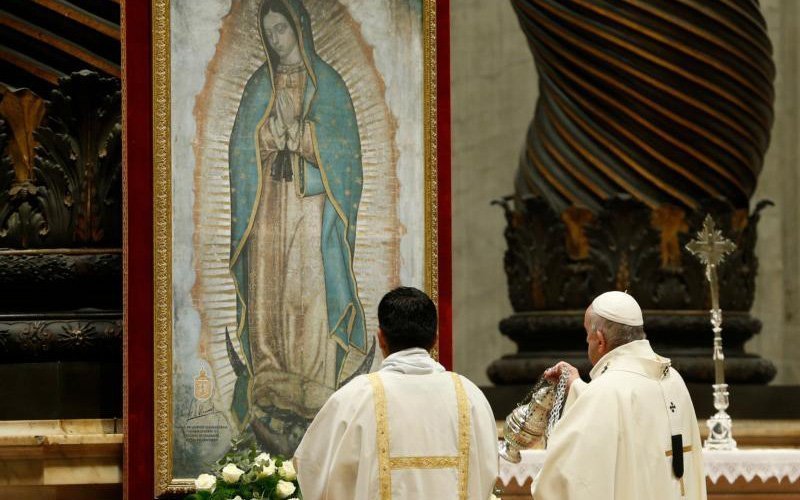 Pope Francis uses incense as he venerates an image of Our Lady of Guadalupe during a Mass marking her feast day in St. Peter's Basilica at the Vatican Dec. 12, 2019. (CNS photo by Paul Haring)

A celebration for Our Lady of Guadalupe

VATICAN CITY (CNS) — Celebrating the feast of Our Lady of Guadalupe, Pope Francis said she reminds Catholics of her true essence as a woman, a mother and a “mestiza” or person of mixed race.

She revealed herself to St. Juan Diego as a “mestiza” to show “that she is everyone’s mother,” and she speaks to everyone as she spoke to this indigenous saint five centuries ago, with tenderness and motherly love, the pope said in his homily during a Mass in St. Peter’s Basilica Dec. 12.

The pope and concelebrating cardinals and bishops processed into the basilica dressed in white. Among the concelebrants were U.S. bishops from Illinois, Indiana and Wisconsin who were in Rome as part of their Dec. 9-13 “ad limina” visits to report on the status of their dioceses.

Pope Francis stood before a replica of St. Juan Diego’s tilma, which bears the image of Mary, who appeared to the saint in 1531.

In his homily, which the pope delivered off-the-cuff in Spanish, he reflected on the way Mary appears in the Gospels and in the apparitions to St. Juan Diego.

She is first and foremost a woman who has been given many titles — many which contain the title “Our Lady,” which underlines her womanhood, he said.

But, he said, “she doesn’t try to be something else: she is a woman disciple,” the pope said.

She is humble and faithful to her teacher, her son, “the only Redeemer,” he said.

She never asked and “never wanted to take something of her son for herself. She never presented herself as a co-Redemptrix, but as a disciple” who served him and gave life, he said.

Pope Francis’ mention of Mary and the role of co-Redemptrix was a reference to the fact that, for decades, some Catholics, including specialists in Mariology, have requested that Mary be officially proclaimed co-Redemptrix for her cooperative role with Jesus, the redeemer. However, St. John Paul II and Popes Benedict XVI and Francis declined to do so.

Like Mary, women make the church maternal and transform it into the “holy mother church,” he said.

It is also important, Pope Francis said, that Mary appeared to St. Juan Diego as a woman of mixed race.

That way she shows she is the mother of all peoples; she became one with the people and, by bringing Jesus into the world, she also made God one of the people with Jesus as both true God and man.

At the end of the Mass, Cardinal Marc Ouellet, head of the Vatican Congregation for Bishops and president of the Pontifical Commission for Latin America, gave special thanks and congratulations to Pope Francis for the 50th anniversary of his ordination to the priesthood Dec. 13.

After applause from the congregation, Cardinal Ouellet thanked the pope for the way he lives the priesthood, “in a spirit of humility and mercy, in a spirit of reform and holiness, giving priority and great charity to those most in need.”

“Not everyone understands fully” the pope’s gestures, words and decisions, he said, “but I can assure you that the people of God who walk in faith are inspired and consoled by your example and magisterium.”