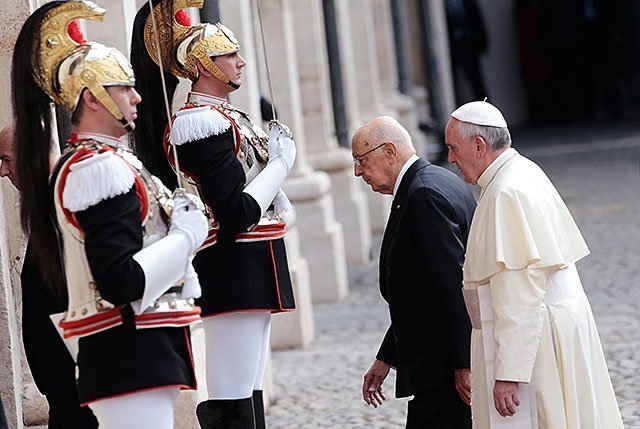 ROME (CNS) — Pope Francis made the first state visit of his pontificate Nov. 14, traveling two miles from Vatican City to Italy’s presidential palace, where he voiced the church’s solidarity with the nation in facing social challenges that included immigration, unemployment and the well-being of families.

"There are so many questions on which we share common concerns, and where our responses can converge," the pope said in his address to Italian President Giorgio Napolitano, following their private half-hour meeting. "The primary task for the church is to bear witness to God’s mercy and encourage generous responses of solidarity in order to open a future of hope."

Pope Francis recalled his July visit to the southern Mediterranean island of Lampedusa, a landing point for many immigrants without legal permission to enter Europe.

During that visit, the pope said, he "witnessed at close range the suffering of those who, owing to war or poverty, set out as emigrants under often desperate conditions," and "saw the laudable example of solidarity of the many who work generously to welcome them."

Pope Francis also mentioned his pilgrimages to the island of Sardinia in September and to the city of Assisi in October.

The pope said that the family lies at the "center of social hopes and difficulties," since it is the "primary place where the human being grows and is formed, where one learns values and the examples that render them credible." Thus, he said, the family deserves to be "appreciated, valued and protected."

Napolitano, 88, praised the pope’s "conception of the church and the faith," which he said had impressed all Italians, "believers and nonbelievers."

"We have been struck by the absence of all dogmatism, the distancing from positions ‘not touched by a margin of uncertainty,’ the call to leave ‘room for doubt’ characteristic of the ‘great leaders of the people of God,’" Napolitano said, quoting the pope’s words from an interview with a Jesuit confrere published in September.

Pope Francis’ two-hour visit to the Quirinal Palace, which was a papal residence until the reunification of Italy in 1870, was marked by touches of his signature informality.

The pope rode to the palace in a dark blue Ford Focus sedan and his motorcade drove through ordinary traffic on the streets of Rome. By contrast, when Pope Benedict XVI made his first state visit to Italy in 2005, he rode in an open-topped Mercedes, flanked by a squad of helmeted Italian military police on horseback.

In what the Vatican press office described as an innovation to the protocol for state visits, Pope Francis greeted not only government ministers and other dignitaries but also palace staff members and their families, whom he encouraged to greet visitors to the palace with a "spirit of welcome and understanding."