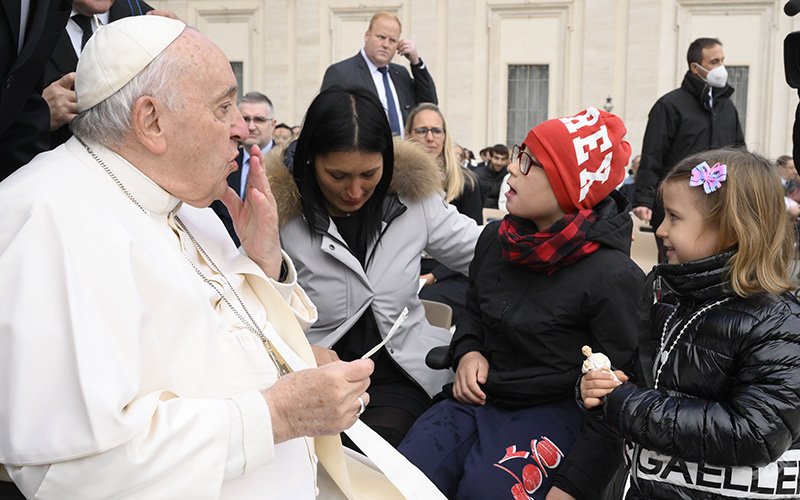 Pope Francis blows a kiss to two children who earlier had run up on to the stage during his weekly general audience in St. Peter's Square at the Vatican Nov. 9, 2022. (CNS photo by Vatican Media)

VATICAN CITY (CNS) — For there to be peace, people need to expand their horizons, engage in dialogue and work with each other in a way that sets aside selfishness and ambition, Pope Francis said.

Reflecting on his recent visit to Bahrain during his weekly general audience Nov. 9, the pope said, “I sensed this need in Bahrain and I hoped that religious and civil leaders throughout the world might be able to look beyond their own borders, their own communities, to care for the whole.”

“This is the only way to confront certain universal issues, such as that God is being forgotten, the tragedy of hunger, the care of creation, peace,” he said.

The world needs to reject confrontation and walk the path of encounter, he said, especially when it comes to “the insanity of war of which battered Ukraine is a victim, and of many other conflicts that will never be resolved through the infantile logic of artillery, but only with the gentle power of dialogue.”

Pope Francis told people at the audience why he decided to visit a Muslim-majority nation when there are so many countries in the world with a predominately Christian population.

The answer, he said, can be summed up in three words: dialogue, encounter and journey.

The opportunity for “the long-desired journey” Nov. 3-6 came thanks to an invitation by Bahrain’s King Hamad bin Isa Al Khalifa, who was sponsoring a forum on dialogue between the East and the West, in order to “discover the richness that other peoples, traditions and beliefs possess,” the pope said.

Bahrain, an archipelago of 33 islands in the middle of the Persian Gulf, “helps us understand that it is not necessary to live by isolating ourselves, but by coming closer,” he said.

“The cause of peace necessitates this, and dialogue is ‘the oxygen of peace,'” even at home and in the family, he added.

The Second Vatican Council saw that peace needed men and women who could see and think beyond their own nation, “put aside national selfishness and ambition to dominate other nations” and develop a “profound reverence for the whole of humanity,” the pope said.

This approach is still greatly needed in today’s world, he said, and the Bahrain forum “encouraged the choice of the path of encounter and the rejection of confrontation.”

The trip to Bahrain also focused on the need for encounter, he said, because without offering the other a heartfelt welcome, “dialogue remains empty” and “remains on the level of an idea rather than reality.”

The pope said so many individuals and groups he met, especially the young Christian and Muslim students at Sacred Heart School, showed what this encounter looks like. Children and young people “need to get to know each other so that fraternal encounter might prevent ideological divisions.”

The other aim was “journey,” he said, because being the first pope to visit Bahrain “was part of a process initiated by St. John Paul II when he went to Morocco.”

It was “a new step on the journey between Christian and Muslim believers — not to confuse things or water down the faith, but to create fraternal alliances,” he said.

Interreligious dialogue does not “water down” the faith, he added, because the only way to have real and fruitful dialogue is when each person remains firmly rooted to and true to his or her own identity.

The Christians and Catholics in Bahrain truly live “on a journey,” he said, as the majority of them are immigrant laborers who “discover their roots in the people of God and their family within the larger family of the church.” They forge ahead in life with joy, “in the certainty that the hope of God does not disappoint.”

“Thinking about their journey, their daily experience of dialogue, let us all feel called to expand our horizons” with hearts that are open, not hardened and closed tight, “because we are all brothers and sisters,” Pope Francis said.

People must strive to open up, “to enlarge our interests, to dedicate ourselves to knowing about others,” he said.

“If you dedicate yourself to getting to know others, you will never be threatened, but if you are afraid of others, you make the threat,” he said.