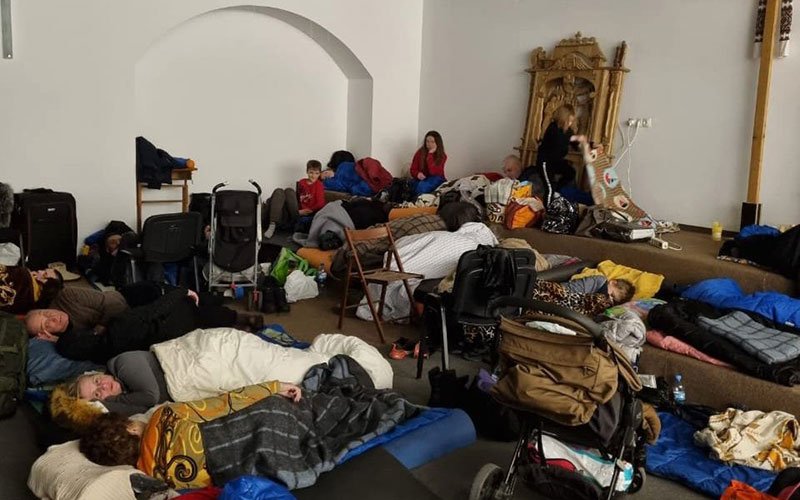 People take shelter in the basement of the the Ukrainian Catholic Cathedral of the Resurrection in Kyiv, Ukraine, Feb. 25, 2022, after Russia launched a massive military operation against Ukraine. As some Ukrainians fled their homes, others remained trapped because of clogged roads and martial law. (CNS photo courtesy Ukrainian Greek Catholic Church)

ROME (CNS) — As Russian troops approached Ukraine’s capital, Pope Francis phoned the head of the Ukrainian Catholic Church, offering his encouragement and promising, “I will do everything I can” to help.

The pope called Archbishop Sviatoslav Shevchuk of Kyiv-Halych, major archbishop of the Eastern-rite church, late in the afternoon Feb. 25, according to the Ukrainian Catholic Church’s press office in Rome.

Earlier in the day, breaking usual diplomatic practice, Pope Francis had left the Vatican and gone to the Russian Embassy to the Holy See “to express his concern for the war,” said Matteo Bruni, the head of the Vatican press office.

Archbishop Shevchuk’s office said that, during the phone call, Pope Francis asked him about the situation in Kyiv and throughout Ukraine on the second full day of the Russian attack. According to multiple news reports, Russian troops were advancing on the capital, Kyiv, where the archbishop has remained.

Pope Francis asked about the bishops and priests in the areas of heaviest fighting, the Ukrainian Catholic press office said. And he thanked the church for its closeness to the people.

“In particular, the pope praised the decision to remain with the people and to be at the service of the neediest,” including by opening the basement of Resurrection Cathedral in Kyiv as a bomb shelter, which already was being used by dozens of people, including families with children.

The press office had reported Feb. 24 that Archbishop Shevchuk himself had been forced to take shelter there. The archbishop had been scheduled to be in Florence, Italy, at a meeting of European and Mediterranean bishops, but canceled the trip when tensions with Russia worsened.

“The Holy Father assured His Beatitude Sviatoslav of his closeness, support and prayers,” the press office said. At the end of the call, the pope gave his blessing to the Ukrainian people.