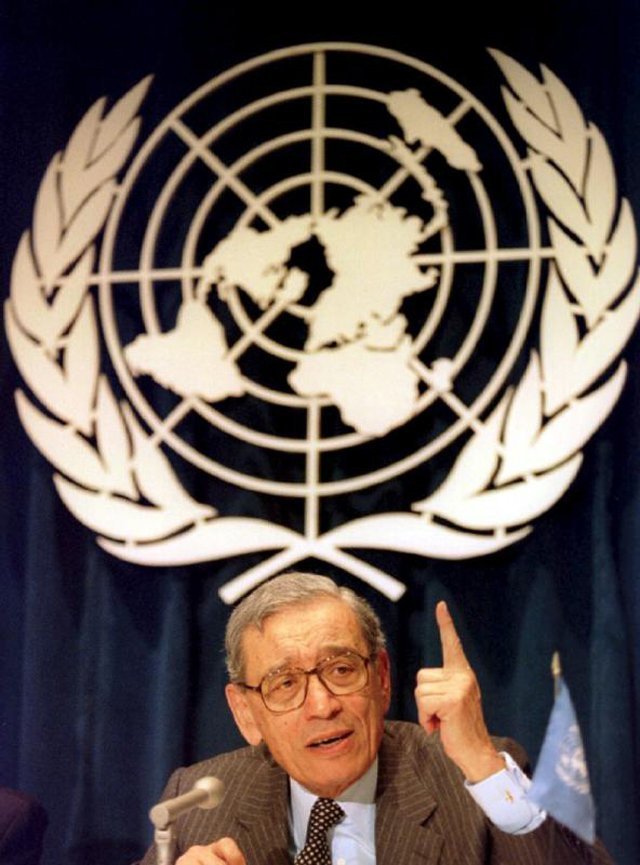 Former U.N. Secretary-General Boutros Boutros-Ghali died Feb. 16 at a hospital in the Egyptian city of Giza at age 93. He is pictured in a 1993 photo.

VATICAN CITY (CNS) — Pope Francis praised the "generous service" of the former secretary-general of the United Nations, Boutros Boutros-Ghali, and offered his condolences and prayers in the wake of his death.

"Saddened to learn" of Boutros-Ghali’s death, the pope extended his "heartfelt condolences" to Ban Ki-moon, the current head of the United Nations, with a telegram sent by Cardinal Pietro Parolin, the Vatican’s secretary of state. The Vatican released a copy of the telegram Feb. 17, one day after Boutros-Ghali died in an Egyptian hospital after being admitted days earlier for a broken leg. He was 93.

Recalling Boutros-Ghali’s "generous service to his country and to the international community, His Holiness offers the assurance of his prayers for the late secretary-general’s eternal rest, and he invokes the divine blessings of peace and strength upon the members of his family and all who mourn his loss," the telegram said.

Boutros-Ghali, an Egyptian, was the first Arab and the first African to be U.N. secretary-general. He was a Christian — Coptic Orthodox — from a Muslim country, and his wife was Jewish.

As Egyptian foreign minister, Boutros-Ghali was known as one of the architects of the Camp David Peace Accords.

Boutro-Ghali met with Vatican officials on multiple occasions, first as Egyptian foreign minister, then as U.N. secretary-general, 1992-1996. His term in office included the Rwandan genocide, the international population development conference, and the U.S., French and British bombing of Iraq under President George H.W. Bush.

In 1993, he received the first Path to Peace Award, presented annually by the Path to Peace Foundation, which works in conjunction with the Holy See Observer Mission to the United Nations. The award is presented to an individual in recognition of his or her commitment to the development of peace in the national and international arenas.

In 1994, then-Archbishop Jean-Louis Tauran, Vatican foreign minister, said he had had two discussions with Boutros-Ghali about the pastoral care of U.N. peacekeepers. He said the "fundamental right of every soldier to spiritual assistance" had to be spelled out in the guidelines for U.N. peacekeepers.

As secretary-general opening the 1994 International Conference on Population and Development, he said he hoped participants would not lose time in disputes over terminology. He said that no single philosophical, moral or spiritual vision can be imposed on humanity.

Boutros-Ghali was born in Cairo Nov. 14, 1922, and studied in Cairo, Paris and the United States. He taught international law and headed the politics department at Cairo University. He also served as a journalist and said learning that writing style "helped me come out of the university’s ivory tower."