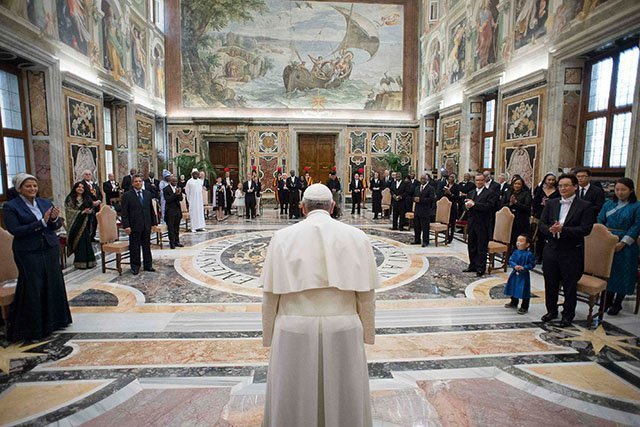 Pope Francis is greeted by 13 new ambassadors to the Holy See as they present their letters of credential at the Vatican Dec. 18. During the special audience, the pope expressed his joy over the historic turning point in U.S.-Cuba relations as the two countries agreed to restore diplomatic ties after half a century.

VATICAN CITY (CNS) — Pope Francis expressed his joy over the historic turning point in U.S.-Cuba relations as the two countries agreed to restore diplomatic ties after half a century.

"Today we are happy because we have seen how two peoples who were distanced for so many years took a step toward each other yesterday," he told a group of new ambassadors.

The pope credited the breakthrough to the consistent, constant efforts of the nations’ ambassadors and the "noble" task of diplomacy.

The pope’s comments came Dec. 18 in a speech to 13 new ambassadors to the Vatican who were presenting their letters of credential to the pope. Among the 13 were ambassadors representing Mongolia, Rwanda, Qatar, New Zealand and Bangladesh.

The pope told them that the work of an ambassador is carried out with "tiny steps, tiny things" even "really tiny" efforts.

But all of those efforts "always end in creating peace, bringing people’s hearts closer together, sowing fraternity among peoples," he said.

Referring to the announcements by the United States and Cuba Dec. 17 to restore relations, but without specifically naming the two countries, the pope told the diplomats that the rapprochement "was moved forward by ambassadors, by diplomacy. Your work is noble, very noble."

Cardinal Pietro Parolin, Vatican secretary of state, said the pope’s "culture of encounter" was a decisive tipping point for restored relations and offers the key to diplomatic success stories in the future.

"If the dialogue is sincere its final goal, its aim is always helping people come together, even in their respective differences and help them collaborate," he said.

The cardinal said this landmark move has come after many years of the hard work, patience and "small steps" of many people, including the popes, starting with St. John XXIII.

However, he said, Pope Francis, as the first pope from Latin America, "was decisive because he was the one who took the initiative to write to the two presidents to invite them to overcome the difficulties existing between the two countries and to find a point of agreement, a point of encounter.

"Certainly this is also due to the fact that he comes from that region and therefore effectively knows the problems and he also found the right way, let’s say, to foster a bit a solution to the separation and a coming together of the two sides," he said.

Cardinal Parolin said he believed the breakthrough between the United States and Cuba will serve as an inspiration and model for the rest of Latin America and the world when it comes to solving its problems.

"It’s a kind of model," he said, showing how "two nations that had many problems, many difficulties in their relations were able to, thanks to the good will and courage on behalf of their leaders, too," find a positive resolution.

"Perhaps it will inspire other leaders to also have the courage to look for the path of dialogue and encounter," he said.

Meanwhile, a Vatican diplomat said he expected other landmark moves in the future because of the pope’s approach and the skill of Cardinal Parolin.

Archbishop Antonio Mennini, papal nuncio to Great Britain, said in an interview with an Italian journalist that the pope was playing an important role in world diplomacy.

In addition to the cardinal’s "notable qualifications," Pope Francis possesses "a personal diplomacy" and an approach of dialogue "that will bear much fruit," he said in the interview, which appeared on the Aleteia website.

"His being from Latin America, among other things, helps him have a unique view of every situation that involves all the communities of this continent. I am sure we will see other similar results," the archbishop said.

The Italian archbishop, who served as nuncio to the Russian Federation for eight years as well as Uzbekistan and Bulgaria before that, said this "great gesture of an easing of tensions can be a sign of similar initiatives with other countries too," specifically, he said, between the United States and Russia in the wake of sanctions imposed after the crisis in the Ukraine.

"Russia needs the West, but the West also needs Russia," particularly in helping resolve the crises in the Middle East, Syria and the nuclear question in Iran, he said.

He said Pope Francis is following the footsteps of popes before him who were instrumental in landmark diplomatic moves by "responding to the evangelical call to ‘be shrewd as serpents and simple as doves.’"

"The church doesn’t have enormous powers but it can offer dialogue and friendship like (Pope Francis) does, and we hope that the Lord may always help him in this task in order to offer a remedy to the "World War ‘in bits and pieces’" being waged today, he said.

Meanwhile, the Cuban bishops’ conference expressed "special gratitude" to the pope for his role as a "major player in a desire that has now become reality" and to God for the "new horizons of hope" shining before the Cuban people.

The bishops also said in their written statement that they hoped that "the good will expressed by the presidents (of Cuba and the United States) may contribute to the material and spiritual welfare of our people."

They added their appreciation for the release and return of three Cubans, who were imprisoned in the U.S. for about 14 years, as well as the release of a "North American prisoner" who was reunited with his family.