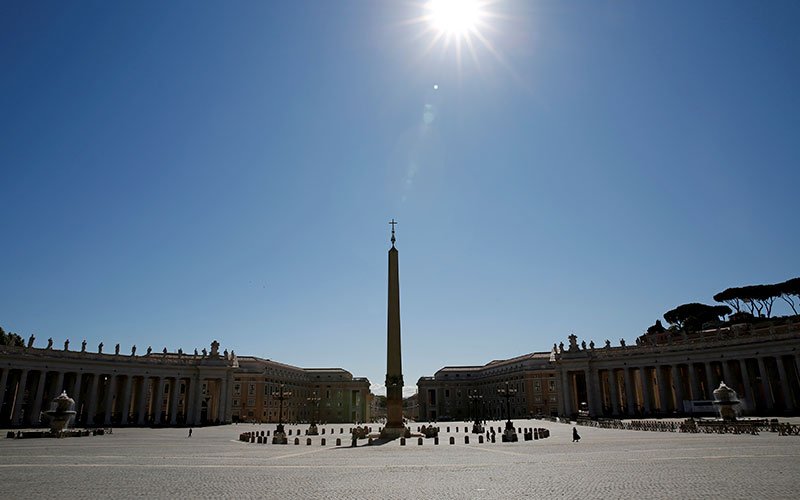 A general view shows an almost deserted St. Peter's Square as Pope Francis holds the weekly general virtually in the library of the Apostolic Palace at the Vatican May 27, 2020. (CNS photo by Remo Casilli, Reuters)

“Prayer is powerful because it attracts the power of God, and God’s power always gives life, always,” the pope said May 27 during his weekly general audience, which was livestreamed from the library of the Apostolic Palace.

Continuing his series of audience talks about prayer, Pope Francis looked at the Bible’s accounts of how sin entered the world and seemed to spread like “an oil stain,” sowing violence and death in the world.

“God’s plan for humanity is good, but in our daily lives we experience the presence of evil,” he said. “It’s an everyday experience.”

With the sin of Adam and Eve, Cain murdering Abel and countless other biblical accounts of murder and mayhem, the pope said, “one has the impression that prayer is the bulwark, the refuge for human beings against overwhelming waves of evil that are growing in the world.”

And, he said, “when you think about it, we also pray to be saved from ourselves. It is important to pray, ‘Lord, please, save me from myself, from my ambitions, from my passions.'”

By calling upon the power of God to change human hearts, “prayer cultivates seedbeds of rebirth in places where human hatred is able only to enlarge deserts,” the pope said.

“In the first pages of the Bible, those who pray are peacemakers,” he said. “In fact, prayer, when it is authentic, frees one from the instinct for violence and is a gaze turned toward God so that he would once again take care of the human heart.”

Even when the world seems to be overcome by evil and evildoers, he said, there always have been and will be people who pray, “attracting God’s power.”

“Prayer is a chain of life, always. The many men and women who pray sow life,” he said. Even the smallest prayer, even the sign of the cross, is a statement that God is in charge.

God acts in the world thanks, in part, to this “remnant of humanity that has not adapted to the law of the strongest, but asks God to do miracles and, especially, to transform our hearts of stone into hearts of flesh,” Pope Francis said.

Summarizing his talk for Arab speakers, the pope said that “prayer does not change God but changes us and makes us more docile to his holy will.”