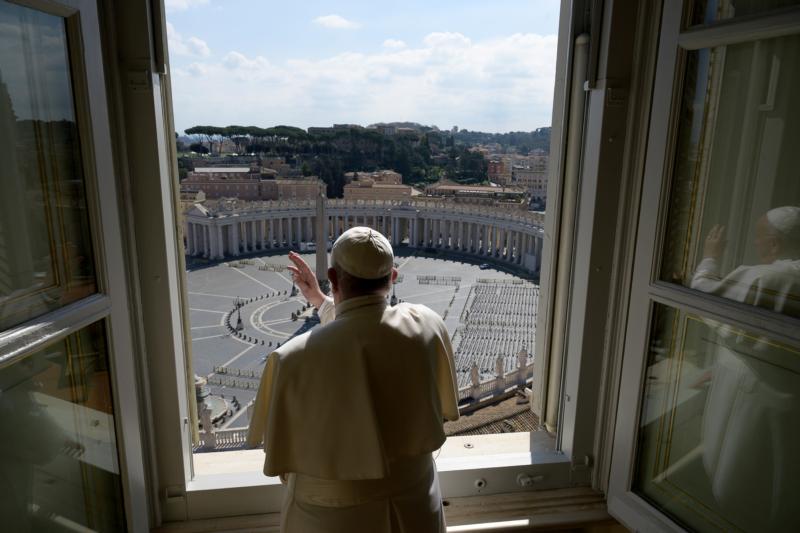 Standing in the window of the library of the Apostolic Palace overlooking an empty St. Peter's Square, Pope Francis blesses the city of Rome March 15, 2020, still under lockdown to prevent the spread of the coronavirus. (CNS photo by Vatican Media/Reuters)

VATICAN CITY (CNS) — Standing in the window of the library of the Apostolic Palace overlooking an empty St. Peter’s Square, Pope Francis blessed the city of Rome still under lockdown to prevent the spread of the coronavirus.

During a live broadcast of his Sunday Angelus Address March 15, the pope praised “the creativity of priests,” especially in the hard-hit northern Italian region of Lombardy, who continue to find new ways to minister to the faithful.

“I received so much news from Lombardy on this creativity. It is true, Lombardy has been struck hard. There are priests who think of a thousand ways to be close to the people, so that people do not feel abandoned; priests with apostolic zeal,” the pope said. “A big thank you to you priests.”

Several viral videos and articles showed how priests are trying to reach out to people, including Father Giuseppe Corbari, a priest in the northern city of Giussano, who asked parishioners to send him their selfies. He then placed each picture in the pews of his empty church while he celebrated Mass.

“It’s a horrible time, we must believe and be close. I will continue to celebrate Mass with more joy because my parishioners are all here, even if only by photo,” Father Corbari said in an interview published in the Lombardy newspaper Il Giorno March 15.

After reciting the Angelus prayer, the pope said that while people find themselves “more or less isolated” during the pandemic, the lockdown can also be a time to “rediscover and deepen the value of the communion that unites all the members of the church.”

“United to Christ we are never alone, but instead form one body, of which he is the head. It is a union that is nourished with prayer and also with spiritual communion in the Eucharist, a practice that is recommended when it isn’t possible to receive the sacrament. I say this to everyone, especially to people who live alone,” he said.

Earlier in the day, the pope celebrated a livestreamed Mass at the Domus Sanctae Marthae, where he offered prayers for “all those who are working to guarantee public services: those working in pharmacies, supermarkets, transportation and police officers.”

“Let us pray for all those who are working so that in this time, social and civil life can continue,” the pope said.

In his homily, the pope reflected on the Sunday Gospel reading from St. John, which recounted Jesus’ conversation with a Samaritan woman near Jacob’s well.

The Samaritan woman’s conversion, he said, did not come from the theoretical debate about on which mountain God should be worshipped, but by Jesus manifesting his divinity by speaking the truth about her life.

“May the Lord grant us the grace of praying always in truth, to turn to the Lord with my own truth and not with the others’ truth, not with truth that’s been distilled in debates,” Pope Francis said.