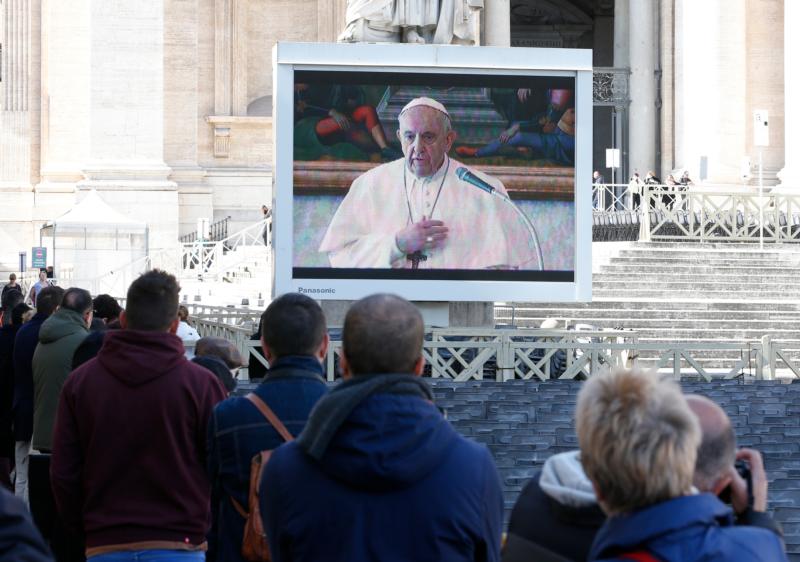 Pope Francis is pictured on a video monitor in St. Peter's Square as he leads the Angelus from his library in the Apostolic Palace at the Vatican March 8, 2020. (CNS photo by Paul Haring)

VATICAN CITY (CNS) — During a live broadcast of his daily morning Mass, Pope Francis prayed for victims of the coronavirus epidemic and the many health care workers fighting its spread.

The pope said he offered the Mass for those infected by the virus, also known as COVID-19, as well as “the doctors, the nurses, the volunteers who help so much, family members, the elderly in retirement homes and prisoners who are incarcerated.”

“This week let us pray together this powerful prayer to the Lord: ‘Save me, O Lord, and show me mercy. My foot is on the righteous path. In the assembly, I will bless the Lord,'” he prayed March 9 at the start of the Mass at the Domus Sanctae Marthae.

The pope’s daily morning Mass is usually celebrated privately with employees or about 20 invited guests.

However, due to a measure adopted to prevent the spread of the coronavirus, the pope stopped inviting outsiders to the Mass and asked that it be broadcasted live “so that those who want can unite in prayer with the bishop of Rome,” the Vatican press office said.

The Italian government issued several nationwide measures to prevent the spread of the virus, including the suspension of “civil and religious ceremonies” as well as funerals, until April 3.

As of March 8, the virus has claimed the lives of 366 people in Italy, while 6,387 remained infected, the Italian health ministry said.

In his homily, the pope reflected on the first reading from the Book of Daniel in which the prophet begs God’s forgiveness on behalf of the people of Israel.

Like Daniel, the pope said, Christians also make an examination of conscience and acknowledge their sins when preparing to receive the sacrament of reconciliation.

However, acknowledging one’s sins doesn’t mean “just making a list” of sins and waiting for God to forgive, the pope said.

The feeling of shame that comes after acknowledging one’s sins, he continued, is a grace that all Christians should ask for from God because a “person who has lost shame loses moral authority, loses respect for others.”

Pope Francis called on the faithful to pray for the “grace of shame” because the memory of one’s sins and the feeling of shame “touches God’s heart and he responds with mercy.”

“The way to encounter God’s mercy is to be ashamed of the bad things we have done,” he said. “So, when I go to confession, I will not only say the list of sins but also the feelings of confusion, of shame for having done this to a God who is so good, so merciful and so just.”