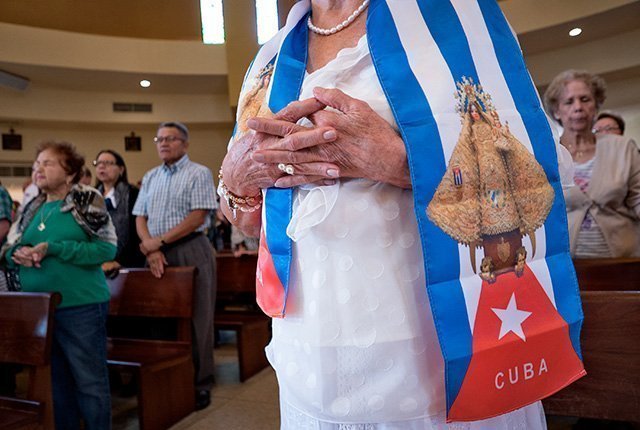 People at the Shrine of the Virgin of Charity of El Cobre in Miami in late September pray for Cuban migrants stranded in Costa Rica. After praying the Angelus with visitors gathered in St. Peter's Square Dec. 27, Pope Francis recalled the many Cuban migrants "who find themselves in difficulty in Central America."

VATICAN CITY (CNS) — Pope Francis asked for prayers and action concerning the plight of Cuban migrants, a rebel attack in the Philippines, and a deadly gas explosion in Nigeria.

After praying the Sunday Angelus with visitors gathered in St. Peter’s Square Dec. 27, the pope recalled the many Cuban migrants "who find themselves in difficulty in Central America," many of whom, he added, "are victims of human trafficking."

Thousands of Cubans are stuck in Costa Rica after Nicaragua began preventing them from crossing its border in mid-November. Costa Rica also recently stopped giving Cubans travel visas. The number of Cuban nationals seeking to immigrate to the United States has risen dramatically since the two countries announced last year the start of normalizing relations.

In his appeal, Pope Francis invited the region to "generously renew all necessary efforts in order to find a rapid solution to this dramatic humanitarian disaster."

In a telegram sent the same day, the pope expressed his sadness after hearing about the "senseless killing of innocent people in Mindanao," the second-largest island in the Philippines.

The Bangsamoro Islamic Freedom Fighters attacked a number of villages Dec. 24, killing at least 10 people, most of them farmers who were working in their rice fields. The rebels demand the independence of the predominantly Muslim region of Bangsamoro from the rest of the Philippines; they have declared their affiliation with the Islamic State.

The telegram, written on behalf of the pope by the Vatican secretary of state, Cardinal Pietro Parolin, said the pope was praying for the families of the victims and for security to be established in the region, "so that dialogue, tolerance and peace may enable each person to live free from fear."

The pope "asks all believers to reject violence in the name of God who is love, and invokes abundant divine gifts of consolation, mercy and strength upon those affected by this tragedy," the telegram said.

The pope also expressed his condolences and prayers in another papal telegram for all those killed or seriously injured in a "tragic explosion of a gas plant in Nnewi," Nigeria.

A massive explosion hit a butane gas depot Dec. 24 at a time when people had gone to fill their stove canisters in preparation for cooking Christmas Day meals, news reports said. The fire burned for hours, and more than 100 people were killed.