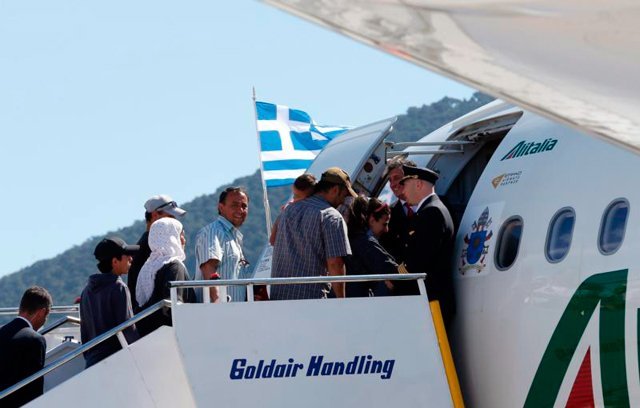 Refugees board Pope Francis' flight to Rome at the international airport in Mytilene on the island of Lesbos, Greece, April 16, 2016. The pope brought 12 refugees to Italy aboard his flight.

MYTILENE, Greece (CNS) — Pope Francis’ five-hour visit to Greece ended with him offering safe passage to Italy to 12 Syrian Muslims, half under the age of 18.

The Vatican had kept secret the pope’s plan to invite the members of three Syrian families to fly back to Rome with him April 16. Rumors began swirling in the Greek media a couple hours before the flight took off, but it was confirmed by the Vatican only as the 12 were boarding the papal plane.

The Vatican Secretariat of State made formal arrangements with the Italy and the Greek governments to obtain the legal permits needed for the refugees to live in Italy, a Vatican statement said. The Vatican will assume financial responsibility for the families, who will be assisted by the Rome-based Community of Sant’Egidio.

All 12 in the group, the Vatican added, had arrived in Greece prior to March 20, the date a European Union agreement with Turkey went into effect for returning most asylum seekers to Turkey. The children are between the ages of 2 and 17.

After spending the morning with desperate refugees interned in a camp in Greece, Pope Francis and Orthodox leaders turned their attention and prayers to the sea, the final burial place of hundreds who died trying to get to Europe.

Just since January, the International Organization for Migration said, more than 150,000 migrants and refugees arrived in Greece and 366 people died attempting crossing the Aegean Sea to the country.

"Though many of their graves bear no name, to you each one is know, loved and cherished," Pope Francis prayed to God April 16 in Mytilene, a city on Lesbos, the island on which more than half the refugees have landed.

"Wake us from the slumber of indifference," the pope prayed, "open our eyes to their suffering and free us from the insensitivity born of world comfort and self-centeredness."

In his prayer, Pope Francis insisted "we are all migrants, journeying in hope" toward God in heaven.

Orthodox Ecumenical Patriarch Bartholomew of Constantinople and Archbishop Ieronymos II of Athens and all Greece stood alongside Pope Francis on the waterfront at the Mytilene harbor on the bright spring day. They, too, offered prayers for those who have died making the crossing and joined the pope in blessing laurel wreaths that were tossed into the sea.

Recognizing the generosity and sacrifice of the Greek government and Greek people, who had tried to assist hundreds of thousands of refugees despite an ongoing economic crisis, the pope told them, "You are guardians of humanity for you care with tenderness for the body of Christ, who suffers in the least of his brothers and sisters, the hungry and the stranger, whom you have welcomed."

With hundreds of thousands of people fleeing violence in Syria and Iraq and fleeing extreme poverty and persecution elsewhere, Pope Francis acknowledged that Europeans and their governments naturally could feel overwhelmed. The fact that the newcomers speak different languages and have different religions and cultures adds to the challenge.

But the migrants "are living in trying conditions, in an atmosphere of anxiety and fear, at times even of despair, due to material hardship and uncertainty for the future," the pope said.

While the concerns of governments are "understandable and legitimate," he said, one must never forget that "migrants, rather than simply being a statistic, are first of all persons who have faces, names and individual stories."

Greece, and to a lesser extent Italy, are on the frontlines of the refugee influx and are forced to bear much of the burden for welcoming, housing and screening them as other European countries close their borders or make entry difficult.

Pope Francis, though, called on Europe to live up to its claim of being "the homeland of human rights."

"Whoever sets foot on European soil ought to sense this, and thus become more aware of the duty to respect and defend those rights," the pope said.

He praised the people of Lesbos for showing that "in these lands, the cradle of civilization, the heart of humanity continues to beat; a humanity that before all else recognizes others as brothers and sisters, a humanity that wants to build bridges and recoils from the idea of putting up walls to make us feel safer. In reality, barriers create divisions instead of promoting the true progress of peoples, and divisions sooner or later lead to confrontations."