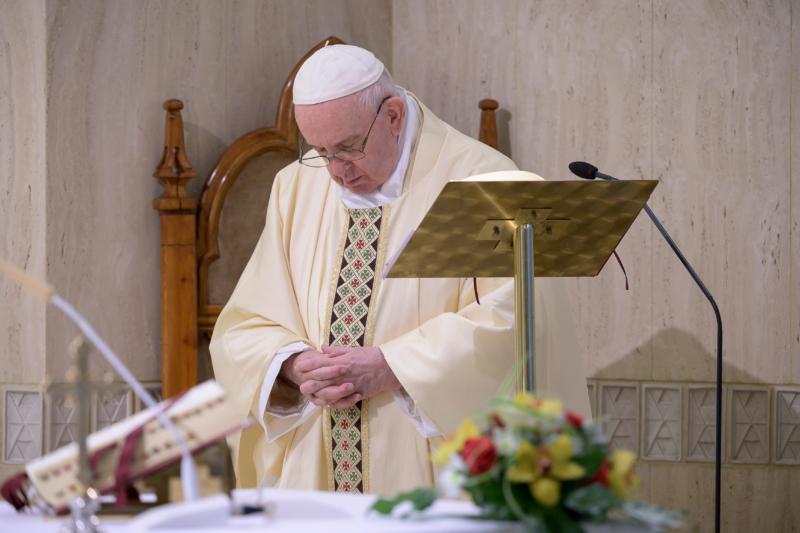 Pope Francis prays as he celebrates Mass in the chapel of the Domus Sanctae Marthae at the Vatican April 24, 2020. (CNS photo by Vatican Media)

VATICAN CITY (CNS) — Pope Francis prayed for teachers and students who are trying to adapt and to do their work online during the COVID-19 pandemic.

“Let us pray today for teachers who have to work so hard in order to do lessons on the internet and other media,” the pope said April 24 at the beginning of his early morning Mass.

“Let us also pray for students who have to take their exams in a way they are not used to,” he said.

In his homily at the Mass, which was livestreamed from the chapel of his residence, Pope Francis looked at how Jesus was always teaching his apostles to be servants who are never afraid to be close to the people and to give them concrete assistance.

“Jesus loved being in the middle of the crowd” because, in addition to being the best way to serve them, it was “a symbol of the universality of redemption,” the pope said.

The apostles’ attitude was understandable, he said, because “they were chosen and they felt a bit (like) a privileged few, a privileged class, an ‘aristocracy,’ let’s say, close to the Lord and the Lord did things to correct them so many times.”

For example, he said, when Jesus got angry with the disciples who were trying to turn the children away from him for fear of them being a nuisance or the time on the road to Jericho when the beggar was told to be silent, but Jesus wanted him to be brought near.

Jesus was always teaching and showing his disciples to be close to the people of God, the pope said.

“It is true that the people of God tire out a pastor, he gets tired,” he added, and the better the priest is at doing good things for people, the more they will keep knocking and asking for help.

The people of God are always asking for things that are concrete, he said.

Sometimes they are wrong in what they ask for, like how after Jesus fed the multitude, as told in the day’s Gospel reading, they wanted to make him a king, he said.

But they are always asking for something concrete, and, in the reading, Jesus tests the disciples by asking them where they could go to buy enough food for all the people who had gathered around them, the pope said.

Essentially, he was telling them it was their responsibility to get the people something to eat, which is the same thing Jesus is saying to priests today, Pope Francis said.

“The power of the shepherd is service, he has no other power and when he mistakenly assumes another power, he ruins his vocation and becomes, I don’t know, a manager of pastoral enterprises, but not a shepherd,” Pope Francis said.

The pastoral dimension is not found in the “structures,” but rather in the heart of the priest, he said.

“Let us pray today to the Lord for the shepherds of the church, that the Lord always speak to them because he loves them so much.”

May what the Lord has to say and teach be heard, he said, especially his teaching to “not be afraid of the people of God and not be afraid to be near.”