Pope prays for victims of earthquake in Croatia - Catholic Courier 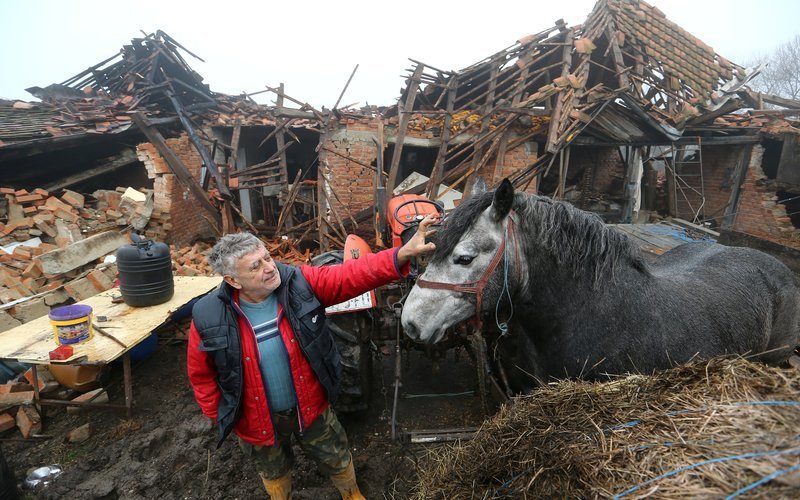 Farmer Tomislav Suknaic touches his horse in front of his destroyed home in the village of Majske Poljane, Croatia, Dec. 30, 2020, following an earthquake. (CNS photo by Antonio Bronic via Reuters)

Pope Francis offered condolences and prayers for the victims of an earthquake that rocked central Croatia.

“I express my closeness to the injured and to those affected by the earthquake, and I pray in particular for those who have lost their lives and for their families,” the pope said Dec. 30 before concluding his weekly general audience.

According to the Reuters news agency, the magnitude 6.4 quake struck Dec. 29 and caused widespread damage. It destroyed at least two villages about 30 miles from Zagreb, the Croatian capital.

As of Dec. 30, seven people were known to have died; dozens were injured and many more people remained missing.

The powerful quake, which was felt as far as Austria, was the second to strike the country in two days. A magnitude 5.2 earthquake hit central Croatia Dec. 28.

In a video message posted on YouTube, Cardinal Josip Bozanic of Zagreb appealed for solidarity with the victims.

“In this trial, God will show a new hope that becomes especially evident in difficult times,” Cardinal Bozanic said. “My call is for solidarity, especially with the families, children, youth, the elderly and the sick.”

According to SIR, the news agency of the Italian bishops’ conference, Cardinal Bozanic allocated emergency aid to those affected by the natural disaster. Caritas Zagreb will also provide assistance, especially in Sisak and Petrinja, the hardest-hit towns.

“Many people have been left homeless, we must deal with this now,” the cardinal said.