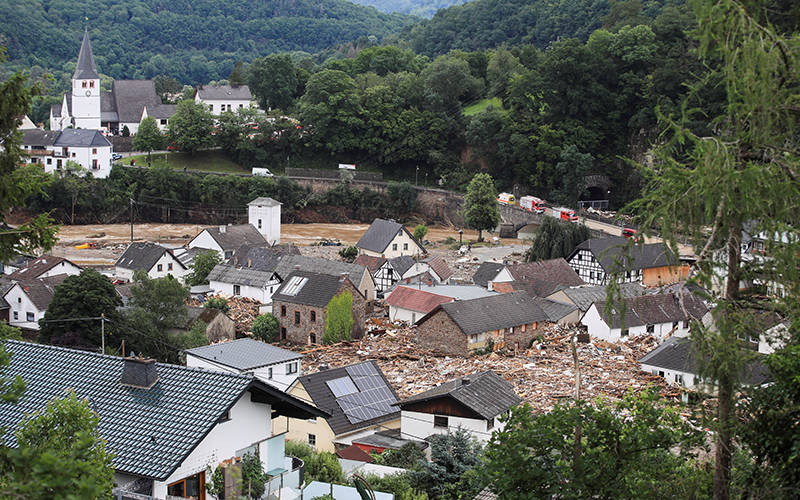 Debris surrounds homes following flooding in Schuld, Germany, July 15, 2021. Pope Francis offered prayers and expressed his closeness to the people of Germany after severe flooding in the western part of the country claimed more than 80 lives. (CNS photo by Wolfgang Rattay/Reuters)

VATICAN CITY (CNS) — Pope Francis offered prayers and expressed his closeness with the people of Germany after severe flooding in the western part of the country claimed the lives of more than 80 people.

“His Holiness remembers in prayer those who lost their lives and expresses to their families his deepest sympathy,” said a telegram sent by Cardinal Pietro Parolin, Vatican secretary of state, to German President Frank-Walter Steinmeier.

“He prays especially for those who are still missing, for the injured and for those who have suffered damage or lost their property due to the forces of nature,” said the message, which was released by the Vatican July 15.

A series of severe rainstorms also struck other countries in Europe, including Belgium, Netherlands, Switzerland and Luxembourg, causing massive flooding and mudslides that leveled homes and buildings.

In Germany, authorities had confirmed the death of 81 people by early July 16. While rescue workers continue working to save people stranded on rooftops, an estimated 1,300 people remain unaccounted for, The New York Times reported.

Bishop Georg BÃ¤tzing of Limburg, president of the German bishops’ conference, also issued a statement July 15, expressing his hope that the missing “will be found unharmed, and that all those in need, who have lost their belongings or the roof over their heads, will receive comfort, hope and help.”

“My heartfelt thanks and all my respect go to all those who have been tirelessly and selflessly providing help since yesterday, often risking their own lives in the process,” Bishop BÃ¤tzing said, especially, “the rescue workers, the fire department, the police and all the people who help and stand by others.”