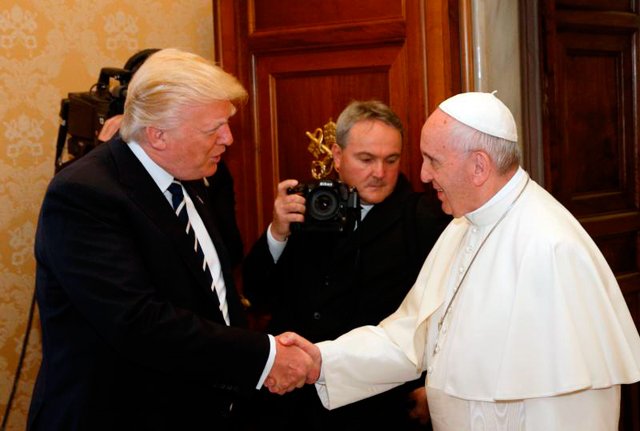 Pope Francis greets U.S. President Donald Trump during a private audience at the Vatican May 24.

VATICAN CITY (CNS) — Pope Francis and U.S. President Donald Trump spent 30 minutes speaking privately in the library of the Apostolic Palace May 24, and as the president left, he told the pope, "I won’t forget what you said."

The atmosphere at the beginning was formal and a bit stiff. However, the mood lightened when Pope Francis met the first lady, Melania Trump, and asked if she fed her husband "potica," a traditional cake in Slovenia, her homeland. There were smiles all around.

Pope Francis gave Trump a split medallion held together by an olive tree, which his interpreter told Trump is "a symbol of peace."

Speaking in Spanish, the pope told Trump, "I am giving you this because I hope you may be this olive tree to make peace."