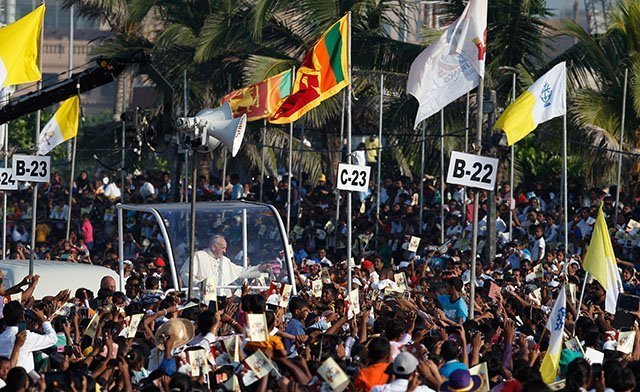 Pope Francis arrives in the popemobile before he celebrates the canonization Mass of St. Joseph Vaz at Galle Face Green in Colombo, Sri Lanka, Jan. 14.

"Each individual must be free, alone or in association with others, to seek the truth, and to openly express his or her religious convictions, free from intimidation and external compulsion," the pope said Jan. 14, before a congregation of more than 500,000 in a beachfront park on the Indian Ocean.

Pope Francis gave his homily half an hour after canonizing St. Joseph Vaz, a 17th- and 18th-century missionary from India who rebuilt the Catholic Church in Sri Lanka after its suppression by Dutch Protestant colonists.

The pope called on Catholics today to emulate the new saint by spreading the Gospel with "missionary zeal."

"St. Joseph knew how to offer the truth and the beauty of the Gospel in a multireligious context, with respect, dedication, perseverance and humility," the pope said. "We are called to go forth with the same zeal, the same courage of St. Joseph, but also with his sensitivity, his reverence for others, his desire to share with them that word of grace which has the power to build them up. We are called to be missionary disciples."

Noting that St. Joseph had won the support of a Buddhist king by caring for victims of a smallpox epidemic, and thus "was allowed greater freedom to minister," the pope praised today’s Sri Lankan Catholics, who make up only 7 percent of the population, for their charitable service to their neighbors.

The church in Sri Lanka today "makes no distinction of race, creed, tribe, status or religion in the service she provides through her schools, hospitals, clinics and many other charitable works. All she asks is the freedom to carry out this mission," he said.

"As the life of St. Joseph Vaz teaches us, genuine worship of God bears fruit not in discrimination, hatred and violence, but in respect for the sacredness of life, respect for the dignity and freedom of others, and loving commitment to the welfare of all."

The canonization Mass reflected the multicultural character of Sri Lankan society. The pope celebrated the liturgy in English and Latin, but there were readings in the local languages of Tamil and Sinhalese. Drums and sitars accompanied the choir, and dancers in traditional costume performed before the start of Mass. The altar was housed in a structure whose peaked roof recalled the Buddhist temple architecture of Kandy, the central region of the country where St. Joseph won acceptance for his ministry.

Temperatures and humidity levels were both in the high 70s and attendants held umbrellas over priests as they distributed Communion.

As the canonization service began, a black wooden cross was carried in solemn procession. The cross was one that St. Joseph had planted in one of the churches; it has been preserved in the church in Sri Lanka’s North Western province.

"There is no trace of St. Vaz’s tomb. The only big relic we have is this cross. Wherever he went, he installed crosses," Father Cyril Gamini Fernando, spokesman for the papal visit, told Catholic News Service.

At the end of Mass, Cardinal Albert Malcolm Ranjith of Colombo addressed the pope, thanking him for the new saint, "God’s precious gem for Sri Lanka."

Cardinal Ranjith also asked for Pope Francis’ blessing and guidance in the search for reconciliation after Sri Lanka’s two-and-a-half decade civil war between government forces and rebels from the Tamil-Hindu minority, which ended in 2009.

"We call upon you to kindly help us in that search for a true healing of hearts, the strength to ask pardon from each other for the senseless violence unleashed then, to forgive and forget that sad past and to arrive at a process of a give and take to build bridges of understanding between the parties hurt in the conflict. We are still far from reaching that goal," the cardinal said.

"Our nation, blessed by teachings of the great world religions, Buddhism, Hinduism, Islam and Christianity, does possess the moral and spiritual strength and nobility needed to generate such peace, but we will all need to make that leap toward each other with a genuine spirit of reconciliation, trust and a sense of reciprocity," the cardinal said.

As Pope Francis gave the final blessing, people held aloft items, such as rosaries or statues; a deaf girl lifted a portrait of the new saint.

Soon after the pope left, priests swarmed the elevated altar and posed around the wood-carved statue of St. Joseph as Sri Lankan and papal flags fluttered around it.

The Mass was Pope Francis’ first public event on his second day in Sri Lanka. In the afternoon, he traveled by helicopter to the northern town of Madhu for a pilgrimage to a Marian shrine that sheltered refugees during the civil war. He was scheduled to fly to the Philippines the next day.

Contributing to this story was Anto Akkara.