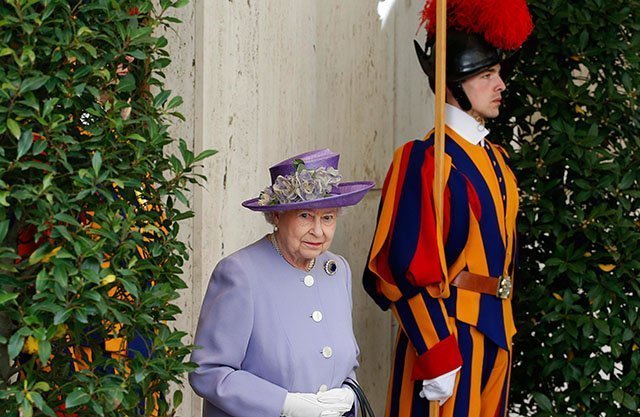 A Swiss Guard stands at attention as Britain's Queen Elizabeth leaves after a meeting with Pope Francis at the Vatican April 3. The Queen and her husband, Prince Philip, were making a one-day visit to meet with the pope and Italian President Giorgio Napolitano.

VATICAN CITY (CNS) — In their first overseas trip in three years, Britain’s Queen Elizabeth II and her husband, Prince Philip, the Duke of Edinburgh, met April 3 with Pope Francis at the Vatican.

The 30-minute visit of the 87-year-old queen and her 92-year-old husband demonstrates "the importance that she places on this relationship with the Holy See and on getting to know Pope Francis," said Nigel Baker, the British ambassador to the Holy See.

The royal visit took place as the Vatican and the United Kingdom were marking the 100th anniversary of the re-establishment of diplomatic relations. Formal ties were broken in the 1570s after Pope Pius V excommunicated Queen Elizabeth I, who had reasserted the Church of England’s independence from papal authority.

The Vatican described the meeting as "official, but informal," which explained why it was held in the studio of the Paul VI audience hall rather than in the library of the Apostolic Palace and why the queen was not wearing black. Instead, she arrived from a luncheon with Italian President Giorgio Napolitano wearing a light lavender skirt and jacket.

The queen and prince arrived about 20 minutes late. After Pope Francis said, "Welcome," Queen Elizabeth said, "Sorry to keep you waiting; we were having a pleasant lunch with the president."

After a 17-minute private meeting, the pope and the queen exchanged gifts. Pope Francis presented the couple with a facsimile of Pope Innocent XI’s order extending the cult of St. Edward the Confessor. St. Edward, king of England in the mid-11th century, is venerated by both Catholics and Anglicans. The pope also had a gift, which he explained in Spanish, was for 8-month-old Prince George of Cambridge, the queen’s great-grandson: a cross mounted on a lapis lazuli orb.

"He will be thrilled by that," the queen said, adding, "when he’s a little older."

Pope Francis gave Prince Philip a series of three medals of his pontificate; the prince thanked him, joking, "It’s the only gold medal I’ve ever won."

Saying it was "a gift for you personally," Queen Elizabeth gave the pope a large basket of food from the estates surrounding her homes; the items included an assortment of honey, a dozen eggs, a "haunch of venison," shortbread, juice, preserves and "Balmoral whiskey." The prince held up the whiskey, explaining what it was, then picked up another bottle and said, "It’s apple juice."

And, fulfilling a long-standing tradition, Queen Elizabeth gave the pope two signed, silver framed photographs of her and the Duke of Edinburgh, telling him, "I’m afraid I have to give you a photograph; it is inevitable."

Reigning since 1952, she was the first British sovereign to welcome a pope to England when she greeted Pope John Paul II in London in 1982. She also welcomed Pope Benedict XVI to Britain in 2010.

Queen Elizabeth is the supreme governor of the Anglican Church of England and her titles include "defender of the faith."

"Her commitment to faith is something that the Holy See recognizes and appreciates," the ambassador said.

While differences over the ordination of women as priests and bishops, the blessing of homosexual unions in some Anglican communities and questions regarding the ordination of openly gay bishops have challenged Catholic-Anglican unity talks, the dialogues continue both on the local and international level.

"The heads of different Christian churches in the United Kingdom are in constant contact and talk to each other a lot," Baker said. "I think it’s no coincidence that actually during her reign, ecumenical dialogue has developed extraordinarily in Britain."

Contributing to this story was Francis X. Rocca in Rome.