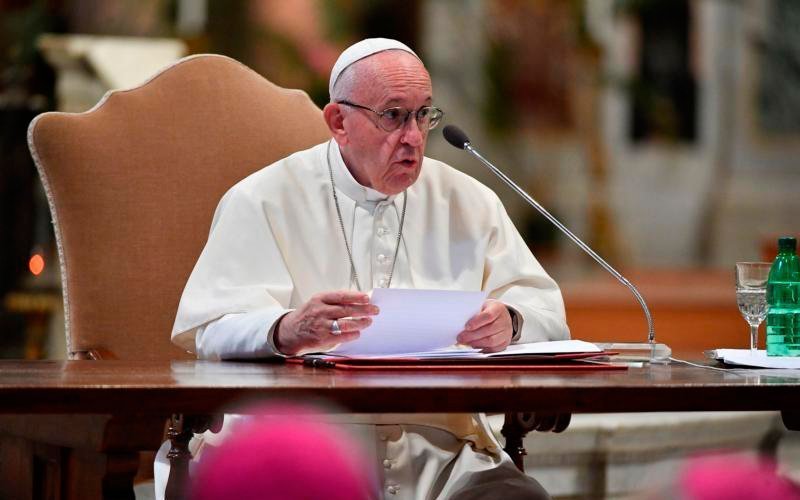 ROME (CNS) — The Catholic Church must reach out to couples living together without being married, Pope Francis told those involved in family ministry in the Diocese of Rome.

The church’s outreach should extend “also to those young people who choose to live together without marrying. We must witness to them the beauty of matrimony,” the pope said Sept. 27 during an evening meeting at the Basilica of St. John Lateran, the cathedral of the Rome Diocese.

Some 850 priests, permanent deacons and married couples involved in diocesan and parish projects to prepare couples for marriage and minister to families met with the pope after a three-day course promoted by the diocese and the Roman Rota, a church tribunal specializing in marriage cases.

The meeting was closed to the media, but the Vatican press office said the pope read his prepared text.

Most of the pope’s prepared remarks focused on the importance of improving marriage preparation programs, not only informing engaged couples about the obligations and responsibilities of married life, but including basic catechesis about the church, the sacraments, salvation and God’s design for humanity.

Preparing couples for marriage, he said, the church “cannot take for granted” that couples have a basic understanding of the faith because the Catholic education of most of them stopped with their first Communion or confirmation.

In addition, he said, “experience shows that the time of marriage preparation is a time of grace in which the couple is particularly open to hearing the Gospel and welcoming it.”

Marriage preparation cannot consist only of a few meetings, the pope said. “Marriage is not just a social event, but a true sacrament that requires an adequate preparation and a knowledgeable celebration. In fact, the marriage bond requires the engaged persons to make an informed choice focused on their desire to build together something that must never be betrayed or abandoned.”

When problems do arise, he said, the roots of the difficulties often are found in a “weakness of Christian faith and in a lack of accompaniment by the church,” which, in effect, “leaves the newlyweds alone after the wedding celebration.”

Support in the first months and years of marriage, he said, can help the couple “develop the antibodies needed to face the inevitable moments of difficulty and struggle in marriage and family life.”

And when couples “experience serious problems in their relationship and find themselves in crisis, we must help them revive their faith and rediscover the grace of the sacrament,” the pope said. However, “in certain cases, which must be evaluated with integrity and interior liberty,” the pastoral worker should “offer appropriate indications for undertaking a process of nullity.”

When a couple becomes “aware of the fact that their union is not a true sacramental marriage and they want out of that situation, may they find the necessary support in bishops, priests and pastoral workers who communicate not only juridical norms, but first of all an attitude of listening and understanding.”

Marriage preparation and ministry to couples, he said, “is a vast, complex and delicate apostolic field in which it is necessary to dedicate energy and enthusiasm with an intent to promote the Gospel of the family and of life.”