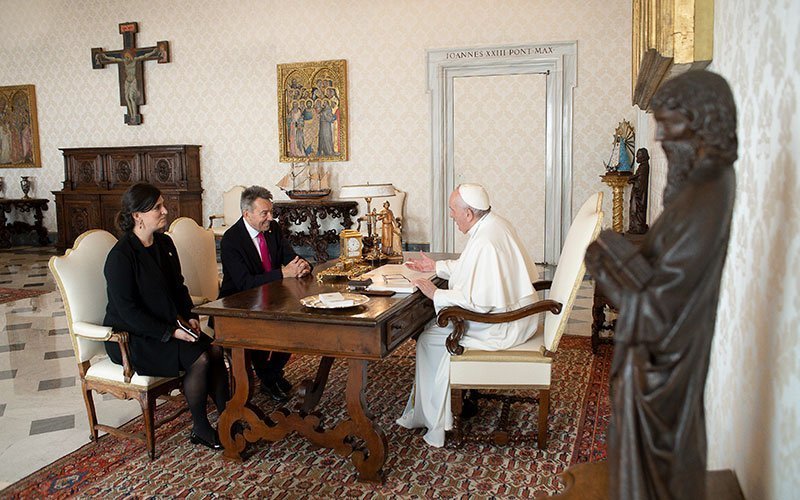 Pope Francis meets with Peter Maurer, president of the International Committee of the Red Cross, during a private meeting at the Vatican Oct. 19, 2020. (CNS photo by Vatican Media)

VATICAN CITY (CNS) — The Catholic Church and the International Red Cross share the common goal of helping the poor and those displaced due to the pandemic and various conflicts around the world, said Peter Maurer, the president of the humanitarian organization.

After meeting with the pope Oct. 19, Maurer described it as “a very positive experience” in which the pontiff expressed “his support for what we are doing in the field for people affected by war and violence.”

Speaking with the pope was “a good moment very frankly because there are few visits I do around the world in which we have so much convergence of views, of values” and shared aspirations, Maurer said in English in an interview with Vatican News, published online Oct. 20.

Whether the current crises in the world are viewed from a perspective of religious belief or international law, he said, both sides, “at the end of the day, enshrine decades and centuries of values, of good behavior in society,” he said.

Among the issues discussed was the COVID-19 pandemic, which Maurer said has “accelerated and accentuated many of the problems” in the world today such as war, violence, climate change and unemployment and poverty.

“I think what is so tragic to see” are not only divisions, but also those who have profited from the pandemic while “the poor have become poorer and more excluded,” he said.

“I think that’s the big issue we are fighting,” Maurer said.

Commenting on the pope’s recent encyclical “Fratelli Tutti, on Fraternity and Social Friendship,” Maurer told Vatican News that the document’s message aligns with the Red Cross’ mission to fight against division and the consequences it has for “the most vulnerable, for the migrants, those displaced by war and violence, those affected by the weaponization of societies, those affected by climate change, by underdevelopment, by exclusion, by poverty, by injustice.”

“I think developing a counternarrative,” he said, “developing a vision of a society which is different, which is inclusive, which brings people together and which builds bridges” is at the center of the encyclical’s message, Maurer said.

“We certainly are very proud of (standing) next to the Vatican and next to the pope in his efforts,” he said.