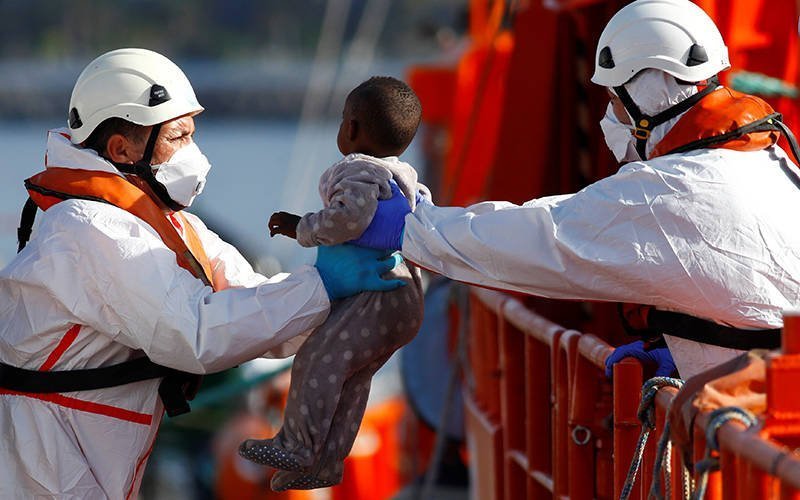 Rescuers help a migrant child disembark from a Spanish coast guard vessel, in the port of Arguineguin, on the island of Gran Canaria, Spain June 4, 2021. (CNS photo by Borja Suarez/Reuters)

VATICAN CITY (CNS) — As the remains of a rickety boat, pulled from the floor of the Mediterranean Sea, were enshrined as a memorial to the hundreds of migrants who died when it sank, Pope Francis prayed that such tragedies would “challenge everyone’s conscience and foster the growth of a more supportive humanity that tears down the wall of indifference.”

“The Mediterranean has become Europe’s largest cemetery,” the pope told visitors gathered in St. Peter’s Square June 13 to pray the Angelus with him.

In Augusta, on the island of Sicily, local government officials and representatives of humanitarian organizations were about to inaugurate the memorial to the migrants who drowned when the rickety boat sank in April 2015. Only 28 of the estimated 1,000 people on board survived.

Father Bruno Ciceri, the Vatican-based international director of Stella Maris, was present at the ceremony and told Vatican News that the remains of the boat “belong to the whole world as a symbol” as “a question mark for everyone” about how to help people enjoy the right to remain in their homelands safely and with a dignified existence and how to improve safeguards for those forced to flee.

The European Council, made up of the heads of state of the European Union members, is scheduled to meet in Brussels June 24-25; a review of the EU migration policy is on the agenda.

When Cardinal Jean-Claude Hollerich of Luxembourg, president of the Commission of Bishops’ Conferences of the European Union, and other officers of the commission met Pope Francis June 11, the continent’s immigration policies were on the top of the agenda.

The EU policies must be rethought, the cardinal told reporters. “Countries like Italy, Spain, Malta and Greece are left on their own” in rescuing, welcoming, verifying and trying to integrate migrants. “This is a shame.”

“We must keep our hearts open,” he said. “The pandemic should have taught us that without social contact, we are reduced in our humanity, and at the doors of Europe we have people who have truly been separated from everything. It pains me. We must do something.”

For the lay Community of Sant’Egidio, one of the first things is to move beyond the EU’s 2013 Dublin Regulation, which stipulated that a migrant’s first country of arrival was responsible for handling that person’s claim for asylum and that even those granted refugee status were required to maintain residency in that country of first arrival for five years.

The rule meant that Italy, Spain, Greece and Malta — the countries with the most arrivals — also are the countries that bear the greatest burden for welcoming and integrating the newcomers, even if many of them have family and potential jobs in other EU countries.

Marco Impagliazzo, president of Sant’Egidio, said the community, which helps thousands of refugees each day, was calling on the EU to eliminate the five-year residency requirement when families in other EU countries want to sponsor their newly arrived relatives or when they have job offers in other countries.

“This is just good sense,” Impagliazzo told reporters June 14 at a Rome news conference. “People have been discussing this for years and doing nothing about it” while people are suffering.

EU leaders have said their late June discussions aim at promoting legal migration and stemming the flow of “irregular” migrants to Europe, but it really does only the latter, Impagliazzo said. “It must be reexamined.”

As for Italy, he noted how leaders in the tourism industry, agriculture and nursing have been reporting a serious shortage of workers; he pleaded with the government to open pathways at least for seasonal workers in those fields.

“Legal pathways to immigration would discourage irregular migration,” he insisted.