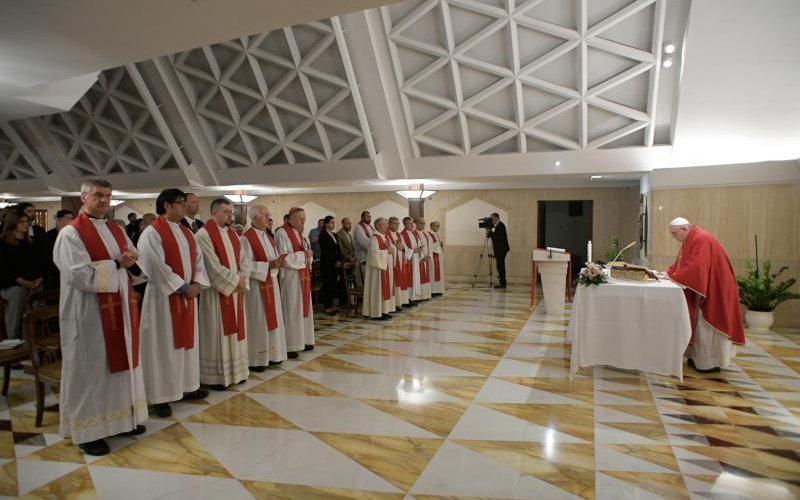 Pope Francis celebrates Mass Sept. 16, 2019, in the chapel of the Domus Sanctae Marthae, where he lives. (CNS photo by Vatican Media)

VATICAN CITY (CNS) — Pray for politicians, government officials and anyone in a position of authority, including priests and bishops, Pope Francis urged as he ended his summer schedule and resumed his celebration of morning Mass with a small congregation.

Wearing red vestments for the Sept. 16 feast of the martyred Sts. Cornelius and Cyprian, the pope said that, today, it seems that everyone is much more willing to insult leaders, inside and outside the church, rather than pray for them.

“Some deserve it,” Pope Francis said of the insults. But the beginning of 1 Timothy 2 urges people to pray “for everyone, for kings and for all in authority.”

Instead, politicians and government officials today seem to be offered a “rosary of insults and swear words,” he said.

But a real Christian who had the good of his or her community, region and nation at heart would not leave that person alone “without asking God to bless” him or her, the pope said during Mass in the chapel of the Domus Sanctae Marthae.

Some may not like their leaders’ politics, thinking they are “too communist” or “corrupt,” the pope said, but writing to Timothy, St. Paul does not enter that discussion, he simply says to pray for them.

Pope Francis said he thought it would be a wonderful thing if politicians and leaders prayed for the people they govern and people prayed for their leaders.