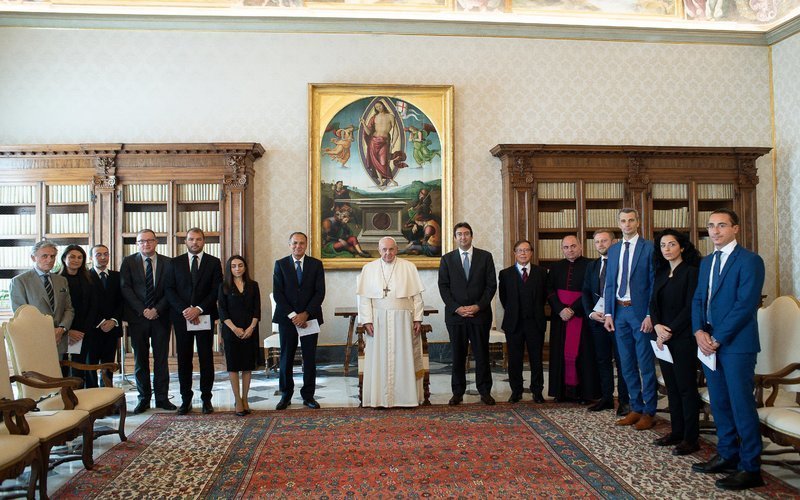 Pope Francis and experts from Moneyval, the European financial crime evaluators, pose for a photo during a meeting at the Vatican Oct. 8, 2020. The Vatican has amended its transparency laws and expanded the role of its Financial Information Authority in monitoring financial transactions. (CNS photo via Vatican Media)

Pope Francis approved a new set of laws that formally transfer the management of all bank accounts and financial investments belonging to the Vatican Secretariat of State.

Issued “motu proprio,” on the pope’s own accord, and published Dec. 28, the pope’s decree orders the Administration of the Patrimony of the Holy See, also known as APSA, to manage the accounts. APSA handles the Vatican’s investment portfolio and real estate holdings.

Supervision of APSA’s management of the assets will be handled by the Secretariat for the Economy, “which from now on will also carry out the function of papal secretariat for economic and financial matters,” the pope decreed.

The Vatican said in a Dec. 28 that the measures formalized provisions set out by the pope in an Aug. 25 letter to Cardinal Pietro Parolin, Vatican secretary of state.

In his letter, the pope also told Cardinal Parolin that the Vatican should disinvest “as soon as possible” from a controversial property development deal in London and from the Centurion Global Fund based in Malta, which has seen significant losses while incurring exorbitant management fees.

The Secretariat of State’s 2018 purchase of a majority stake in the Sloane Avenue property in London’s Chelsea district, which incurred significant debts, raised questions about whether funds from the Peter’s Pence collection were used to finance the deal.

Peter’s Pence is a papal fund used for charity, but also to support the running of the Roman Curia and Vatican embassies around the world.

Cardinal Angelo Becciu, who was asked by the pope to resign and renounce the rights and privileges of a cardinal in September, denied that money for the deal was taken from Peter’s Pence and said that it was taken from a fund within the Secretariat of State.

However, when asked by a journalist Sept. 25 if the money in the Secretariat of State fund came from Peter’s Pence, Cardinal Becciu said, “Yes.”

Nevertheless, the Vatican said that the new measure signed by the pope “establishes greater control and visibility of the Peter’s Pence collection as well as the funds coming from the donations of the faithful.”

According to the Vatican, the “new law is intended to reduce the number of those responsible for economic matters in the Holy See and to concentrate administration, management and economic and financial decisions in the dicasteries suited to that purpose.”

Pope Francis ordered that all liquid assets held by the Secretariat of State at the Institute for the Works of Religion, often referred to as the Vatican bank, or in foreign bank accounts to be transferred to APSA by Feb. 4.

If the secretariat is unable to transfer ownership by the deadline, it must grant power of attorney to Bishop Nunzio Galantino, president of APSA, and exclusively attribute “to him all the powers of ordinary and extraordinary administration” of bank accounts, titles, investment holdings and real-estate management.

The pope also mandated that APSA establish budgetary provisions for so-called “papal funds,” which will include subaccounts for Peter’s Pence, as well as a papal discretionary fund and a fund for specific donations.

Use of the funds must be authorized by the Secretariat for the Economy, which is currently led by Jesuit Father Juan Antonio Guerrero Alves.

The Vatican said the measures are an expression of Pope Francis’ personal commitment to “greater transparency, clearer separation of roles, greater effectiveness in controls and greater adaption of the Holy See’s economy to the mission of the church.”

This will ensure that “the people of God, who help with their generosity to support the mission of the bishop of Rome, may do so with the confidence that their contributions are administered in an adequate and transparent manner with the exercise of due controls.”