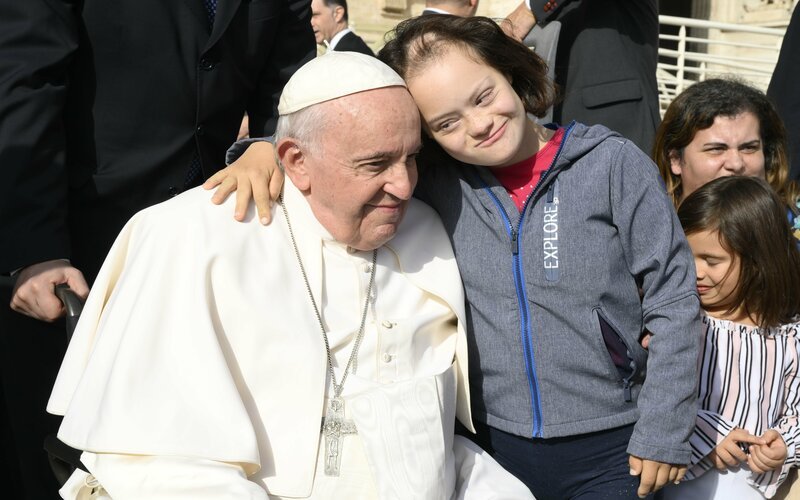 Pope Francis greets a young girl as he makes his way to hold his weekly general audience at the Vatican Oct. 26, 2022. (CNS photo by Vatican Media)

Pope: Seeing God at work in small things helps us accept his call

VATICAN CITY (CNS) — Feelings of desolation and sadness are not signs of trials that may discourage Christians, they can be indispensable signs that point to dangers along the path toward happiness, Pope Francis said.

Although many consider sadness “an ill to avoid at all costs,” Christians should see it as “an indispensable alarm bell for life, inviting us to explore richer and more fertile landscapes that transience and escapism do not permit,” the pope said Oct. 26 during his weekly general audience.

Sadness “is indispensable for our health,” he said. “It protects us from harming ourselves and others. It would be far more serious and dangerous if we did not feel this.”

The pope continued his series of audience talks on spiritual discernment, reflecting on desolation and the role it plays in Christian life.

Pope: Sadness is a traffic light

Recalling the words of St. Ignatius of Loyola, Pope Francis defined desolation as the “darkness of the soul” and the “unquiet of different agitations and temptations” that lead one to becoming “lazy, tepid, sad, as if separated from his or her creator and Lord.”

“No one wants to be desolate, sad,” he said. “We would all like a life that is always joyful, cheerful and fulfilled. Yet this, besides not being possible, would not be good for us either. Indeed, the change from a life oriented toward vice can start from a situation of sadness, of remorse for what one has done.”

However, for men and women who seek to do good, desolation also can be an obstacle “with which the tempter (the devil) tries to discourage us” and can lead to abandoning “work, study, prayer” or other commitments.

“Unfortunately, some people decide to abandon the life of prayer, or the choice they have made — marriage or religious life — driven by desolation, without first pausing to consider this state of mind, and especially without the help of a guide,” he said.

But a “wise rule” of discernment, he said, is “do not make changes where you are in desolation,” but wait until the acute sadness has passed.

While moments of sadness are “an experience common to spiritual life,” the pope said the path of goodness “is narrow and uphill” and encouraged Christians, especially those who “want to serve the Lord, not to be led astray by desolation.”

“If we know how to traverse loneliness and desolation with openness and awareness, we can emerge strengthened in human and spiritual terms,” Pope Francis said. “No trial is beyond our reach.”