Pope: Saints were revolutionaries who lived the beatitudes - Catholic Courier 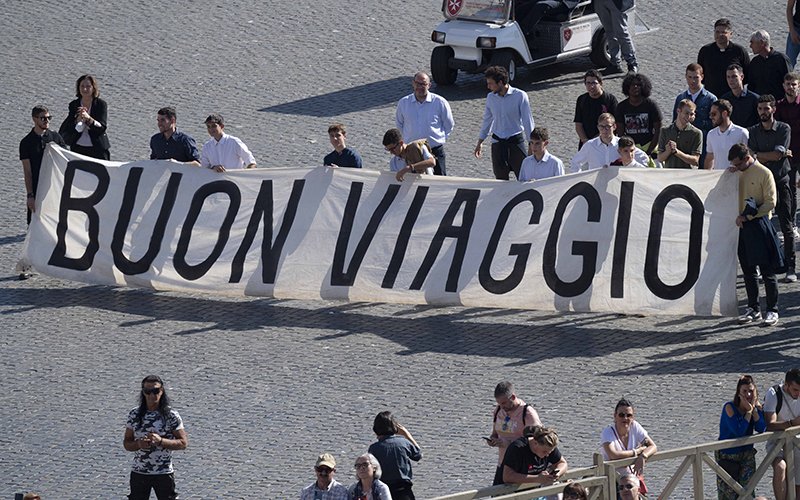 A group of pilgrims wish Pope Francis a good trip to Bahrain as they stand in St. Peter's Square at the Vatican for the recitation of the Angelus Nov. 1, 2022, the feast of All Saints. The pope, asking people to pray for his trip, said the purpose of going to Bahrain was to promote interreligious dialogue and peace. (CNS photo by Vatican Media)

VATICAN CITY (CNS) — The saints were not “starched,” picture-perfect conformists, Pope Francis said; they were “countercultural and revolutionary.”

The multitude of men and women honored on the feast of All Saints lived according to the Eight Beatitudes, which made them decidedly out of place in the world, Pope Francis said Nov. 1 before reciting the Angelus prayer.

“Blessed are the peacemakers”

With thousands of people gathered in St. Peter’s Square, including runners who had participated in the 10k All Saints’ Day race, Pope Francis also encouraged people not only to visit the burial sites of their loved ones the following day, the feast of All Souls, but to go to Mass and pray for them as well.

Talking about saints and the day’s Gospel reading of the beatitudes, Pope Francis focused particularly on “Blessed are the peacemakers.”

Everyone says they want peace, he said, but often what they mean is they want “to be left in peace, to have no problems, just tranquility.”

But, if one reads the beatitudes in the Gospel, he said, they will see that Jesus does not say, “Blessed are those who are at peace,” but blessed are “those who make peace, the constructors, the peacemakers.”

“Indeed, peace must be built, and like any construction it requires effort, collaboration, patience,” he said. And it requires acts of justice and mercy.

While many people today try to convince everyone that only power and force can guarantee peace, the teaching of Jesus and the example of the saints show “peace is not achieved by conquering or defeating someone, it is never violent, it is never armed.”

To begin to sow peace, Pope Francis asked people to look at themselves and ask, “In the places where we live, study and work, do we bring tension, words that hurt, gossip that poisons, controversy that divides? Or do we open the path to peace: Do we forgive those who have offended us, care for those who are at the margins, redress some injustice by helping those who have less? This is building peace.”

At the end of his midday talk, the pope asked for prayers for his trip Nov. 3-6 to Bahrain so that his meetings with local Christians and with Muslim leaders would promote, “in the name of God, the cause of fraternity and peace, which our times so desperately and urgently need.”

And “please,” he said, “don’t forget martyred Ukraine; let us pray for peace, we pray that in Ukraine there would be peace.”