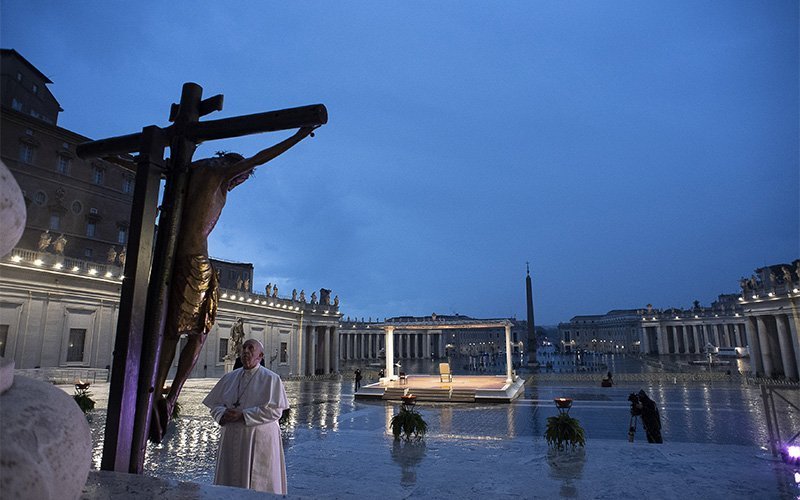 Pope Francis prays in front of the "Miraculous Crucifix" from the Church of St. Marcellus in Rome during a prayer service in an empty St. Peter's Square at the Vatican in this March 27, 2020, file photo. In an interview with an Italian television network, Pope Francis said that while he felt "caged" during the COVID-19 pandemic, it also prompted him to pray more and try to connect with others. (CNS photo by Vatican Media)

VATICAN CITY (CNS) — Pope Francis said that the coronavirus lockdown made him feel imprisoned but ultimately led him to find different ways to carry out his ministry.

In an interview with Italy’s Canale 5 broadcast Jan. 10, the pope was asked how his daily routine changed once COVID-19 restrictions prevented public events at the Vatican.

“First of all, I have to tell you I was caged up,” he said. “But then, I calmed myself and I took life as it came. One prays more, one talks more, one uses the telephone more, one has meetings to resolve problems.”

He also said that while the pandemic has affected his life, “I am happy.”

Pope Francis recalled his mini-pilgrimage March 15 to pray before an ancient wooden crucifix known as the “Miraculous Crucifix,” first carried in procession by the faithful in Rome in 1522 during the great plague.

That pilgrimage, as well as the extraordinary blessing “urbi et orbi” March 27, were “expressions of the pain felt, expressions of love for all people and to show new ways to help each other,” the pope said.

The pope also spoke about the COVID-19 vaccine and said that receiving the vaccine was “the ethical option because you are playing with your health, life, but you also are playing with the lives of others.”

The pandemic, he continued, forced the cancellation of a planned trip to Papua New Guinea and Indonesia “because in good conscience, I can’t be the cause for gatherings, no?”

Pope Francis said that although his visit to Iraq is scheduled for March, he did not know “if it will happen; life has changed.”

“Yes, life has changed,” the pope said. “But the Lord always helps us all.”