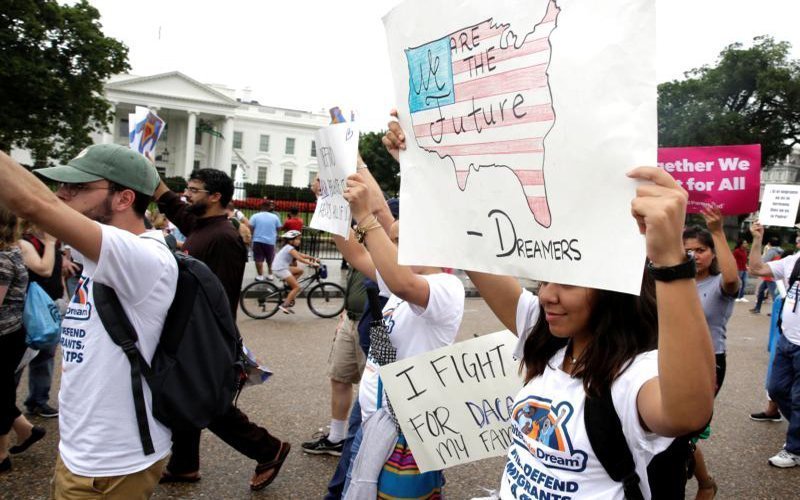 People march outside the White House Aug. 15 at a rally calling on President Donald Trump to protect the Deferred Action for Childhood Arrivals program, known as DACA.

ABOARD THE PAPAL FLIGHT FROM COLOMBIA (CNS) — Politicians who call themselves pro-life must be pro-family and not enact policies that divide families and rob young people of a future, Pope Francis said.

Flying from Colombia back to Rome late Sept. 10, Pope Francis was asked about U.S. President Donald Trump’s decision to end the Deferred Action for Childhood Arrivals program, which allowed some 800,000 young people brought to the United States illegally as children to stay in the country, working or going to school.

Trump announced Sept. 5 that he was phasing out the program; his decision was strongly criticized by the U.S. Conference of Catholic Bishops.

Pope Francis said he had heard of Trump’s decision, but had not had time to study the details of the issue. However, he said, “uprooting young people from their families is not something that will bear fruit.”

“This law, which I think comes not from the legislature, but from the executive (branch) — if that’s right, I’m not sure — I hope he rethinks it a bit,” the pope said, “because I’ve heard the president of the United States speak; he presents himself as a man who is pro-life, a good pro-lifer.

“If he is a good pro-lifer, he understands that the family is the cradle of life and its unity must be defended,” the pope said.

Pope Francis said people must be very careful not to dash the hopes and dreams of young people or make them feel “a bit exploited,” because the results can be disastrous, leading some to turn to drugs or even suicide.

Pope Francis spent only about 35 minutes answering journalists’ questions and commenting on his five-day trip to Colombia. After he had answered eight questions, Greg Burke, director of the Vatican press office, told the pope it was time to sit down because the plane was approaching an area of turbulence.

The pope went to the journalists’ section of the plane still wearing a small bandage on his left eyebrow and sporting a large bump, which had turned black and blue, on his cheek. Rather than joking with reporters, he told them that he had been reaching out of the popemobile to greet people and turned. “I didn’t see the glass.”

While his trip back to Rome did not have to change flight plans like the flight to Colombia Sept. 6 did because of Hurricane Irma, Pope Francis was asked about the apparently increasing intensity of hurricanes and other storms and what he thinks of political leaders who doubt climate change is real.

“Anyone who denies this must go to the scientists and ask,” he said. “They speak very clearly. Scientists are precise.”

Pope Francis said he read a report citing a university study that asserted humanity has only three years to reduce the pace of climate change before it’s too late. “I don’t know if three years is right or not, but if we don’t turn back, we’ll go down, that’s true.”

“Climate change — you can see the effects,” Pope Francis said. “And the scientists have told us clearly what the paths to follow are.”

Everyone has a moral responsibility to act, he said. “And we must take it seriously.”

“It’s not something to play with,” the pope said. “It’s very serious.”

Politicians who doubt climate change is real or that human activity contributes to it should speak to the scientists and “then decide. And history will judge their decisions.”

Asked why he thinks governments have been so slow to act, Pope Francis said he thinks it’s partly because, as the Old Testament says, “Man is stupid, a stubborn one who does not see.”

But the other reason, he said, is almost always money.

Talking about his five-day stay in Colombia, Pope Francis said he was “really moved by the joy, the tenderness” and the expressiveness of the people. In the end, they are the ones who will determine whether Colombia truly has peace after 52 years of civil war.

Politicians and diplomats can do all the right things to negotiate peace deals, he said, but if the nation’s people aren’t on board, peace will not be lasting. In Colombia, he said, the people have a clear desire to live in peace.

“What struck me most about the Colombian people,” he said, was watching hundreds, perhaps thousands, of fathers and mothers along the roads he traveled, and they would lift their children high so the pope would see and bless them.

The parents’ behavior with their little ones, he said, “is a symbol of hope, of a future.”