Pope says Internet a 'gift from God,' should be used for solidarity - Catholic Courier 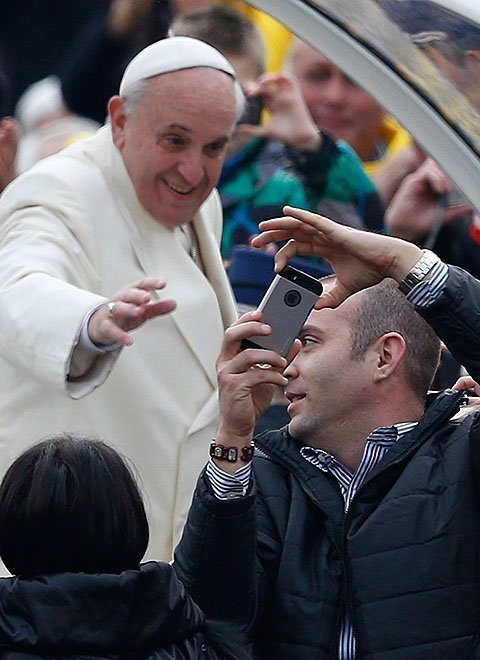 A man takes a "selfie" of himself and Pope Francis as the pope arrives for his general audience in St. Peter's Square at the Vatican Jan. 22.

VATICAN CITY (CNS) — Like the good Samaritan, who stopped on the road to help a person in need, travelers along today’s communication highways should offer support to those they encounter there, Pope Francis said.

"The digital world can be an environment rich in humanity; a network not of wires but of people," he said in his message for World Communications Day.

Modern means of communication, especially the Internet, offer "immense possibilities for encounter and solidarity," he said. Because of that, he said, the Internet is "a gift from God."

"Communication at the service of an authentic culture of encounter" is the theme of this year’s World Communications Day, which most dioceses will mark June 1, the Sunday before Pentecost. The message, released Jan. 23, was dated Jan. 24, the feast of St. Francis de Sales, the patron saint of journalists.

"Good communication helps us grow closer, to know one another better, and ultimately to grow in unity," the pope said.

"The walls which divide us can be broken down only if we are prepared to listen and learn from one another," he said. "A culture of encounter demands that we be ready not only to give, but also to receive."

Good communicators must take the time necessary to listen to others and, more than just tolerate, truly accept them, he said.

"Engaging in dialogue does not mean renouncing our own ideas and traditions, but the claim that they alone are valid or absolute," the pope said in his message.

Archbishop Claudio Celli, president of the Pontifical Council for Social Communications, told reporters that the pope is not proposing "a relativism" of the faith, but is continuing his predecessors’ calls for the church to engage with a multi-cultural and multi-religious world.

"I can’t have an outlook of being the only one and the absolute," Archbishop Celli said. "I am just a concrete incarnation of that truth that is Jesus Christ and his Gospel," which people live out in myriad ways in different cultures and traditions across the world.

Pope Francis, in his message, quoted Pope Benedict XVI’s 2013 World Communications Day text, which says effective Christian witness is "about our willingness to be available to others ‘by patiently and respectfully engaging their questions and their doubts as they advance in their search for the truth and the meaning of human existence’" — not by "bombarding people with religious messages."

Pope Francis said genuinely paying attention to others’ experiences helps one appreciate the various gifts and richness in other cultures and traditions.

A culture of encounter, listening and dialogue will help everyone see and "appreciate more fully the important values inspired by Christianity, such as the vision of the human person, the nature of marriage and the family, the proper distinction between the religious and the political spheres, the principles of solidarity and subsidiarity and many others," he said.

Though there are drawbacks and risks with an accelerated and sometimes isolating means of communication, "they do not justify rejecting social media," he said.

Technology should serve humanity, helping it "grow in humanity and mutual understanding."

The pope called for an attitude of "neighborliness" in communication, to promote closeness and community.

The good Samaritan is a model for how to approach and interact with others on today’s digital highways, taking responsibility for the hurt and lost there, the pope said.

"Whenever communication is primarily aimed at promoting consumption or manipulating others, we are dealing with a form of violent aggression like that suffered by the man in the parable," beaten by robbers and abandoned on the road," he said.

"There is a danger that certain media so condition our responses that we fail to see our real neighbor," the pope said. Information overload or overexposure to injustices like poverty can make us "so accustomed to these things that they no longer unsettle us."

Good communicators bring beauty, goodness and truth to people, something no snappy or sophisticated media strategy can do, he said.

"Let our communication be a balm which relieves pain and a fine wine which gladdens hearts," the pope said.

"May the light we bring to others not be the result of cosmetics or special effects, but rather of our being loving and merciful ‘neighbors’ to those wounded and left of the side of the road."

Pope Francis said impartiality in the media is an illusion, since "only by going out into the world and taking the risk of being truly and transparently oneself can communicators become a trusted and "true point of reference."

"Personal engagement is the basis of the trustworthiness of a communicator," he said.

The pope said he prefers "a bruised church which goes out to the streets" and helps people encounter Christ to "a church suffering from self-absorption," with its doors and digital spaces closed to outsiders.

"We are called to show that the church is the home of all," he said, where people, "whatever their situation in life, can enter."

The text of the pope’s World Communications Day message is available online in English and Spanish.