Pope says 'scandal' of inequality, fear of marriage must be addressed - Catholic Courier 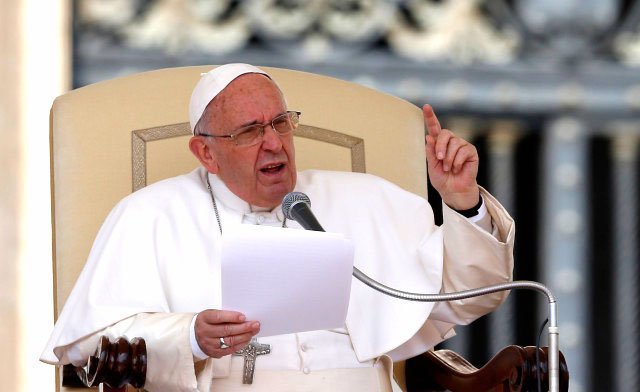 VATICAN CITY (CNS) — Two millennia after the "Gospel of the family" defeated an abusive social practice that humiliated women, the "radical equality" of spouses in Christian marriage must now bear "new fruit" in society, including "the right to equal pay for equal work," said Pope Francis.

This "disparity" between men and women in the workplace is "a pure scandal," Pope Francis said April 29 during his weekly general audience.

Continuing a series of audience talks about marriage, the pope began by saying Jesus demonstrated his great fondness and solicitude for marriage and family when he changed water into wine at the wedding at Cana.

The love between man and woman in marriage is "God’s masterpiece," the pope said, straying from his prepared remarks. Though Jesus’ message to married couples is always the same, "many things have changed" since then, he said.

Today there are fewer marriages, more marriage breakups, and fewer children, the pope noted. Family and marital bonds are broken with "always greater frequency and speed," and children are always "the biggest victims," he said.

The pope said that if a person, since childhood, experiences marriage as a temporary bond, then "unconsciously" he or she will tend to live that way, too.

Though young people rank family first as a social indicator for happiness, he said, many give up on the idea of "an irrevocable bond" and of a long-lasting family life.

"For fear of failure, many do not even want to think about (marriage)," Christian youth included, he said.

"I believe we need to reflect with great seriousness about why many young people ‘don’t feel’ like getting married," the pope said. Why do they "often prefer cohabitation" and why do "they have so little faith in marriage and family?"

The pope dismissed economic difficulties as a major factor, "even if these are truly serious."

The argument that marriage has changed in recent decades because of women’s emancipation "is not valid either," he said.

"This is an insult. It is not true," he added, straying again from his prepared remarks. "It is a form of chauvinism that wants to dominate the woman" and that follows in the footsteps of Adam who blamed Eve because he ate the apple.

"Poor woman," the pope said. "We must defend women."

"In reality," the pope continued, "almost all men and women would like permanent emotional security, a solid marriage and a happy family."

The pope said the fear of failure in marriage is perhaps "the greatest obstacle to welcoming the word of Christ, who promises his grace on the marital bond and on the family."

"The most effective witness to the blessing of marriage is the good life of Christian spouses and their families. There is no better way to communicate the beauty of the sacrament," he said.

"Marriage, consecrated by God, safeguards that bond between man and woman that God has blessed since the creation of the world, and it is the fount of peace and goodness for marital and family life," he added.

The pope also spoke of "an abuse" at the time of the early Christians, "which was the right of husbands to repudiate their wives, even with the most pretentious and humiliating reasons." This practice was "then considered to be normal," he said.

"The Gospel of the family, the Gospel that proclaims this sacrament (of marriage) had defeated this culture of habitual repudiation," he added off the cuff.

"The Christian seed of radical equality between spouses must today produce new fruit," he continued.

"Therefore, as Christians, we have to become more demanding in this respect. For example, backing to the right to equal pay for equal work; the disparity is a pure scandal!" he said. "At the same time, we must recognize the motherhood of women and the fatherhood of men as a treasure that is always precious, especially for the children’s benefit."

He urged Christians to be unafraid to invite Jesus to their "wedding feast" and into their homes, so that Jesus may "safeguard the family."

"When Christians marry ‘in the Lord,’" he continued, "they are transformed into an efficacious sign of God’s love. Christians do not marry only for themselves; they marry in the Lord for the benefit of the whole community, all of society."

The text of the pope’s audience remarks in English is available online at www.vatican.va/holy_father/francesco/audiences/2015/documents/papa-francesco_20150429_udienza-generale_en.html.

The text of the pope’s audience remarks in Spanish is available online at www.vatican.va/holy_father/francesco/audiences/2015/documents/papa-francesco_20150429_udienza-generale_sp.html.