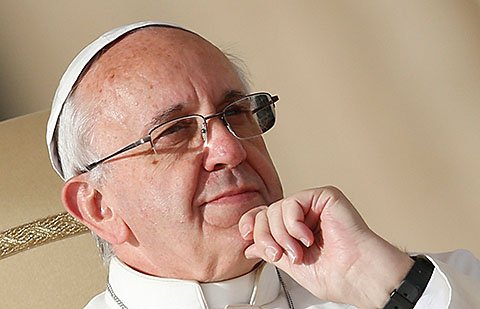 Pope Francis looks on during his general audience in St. Peter's Square at the Vatican Nov. 13.

VATICAN CITY (CNS) — While national borders are no longer barriers to trade, travel and communication, Pope Francis said, new walls are being erected in the form of inequality, discrimination and the violation of basic human rights.

In the age of globalization — and of global crises — the world needs a new form of diplomacy and diplomats capable of building a global sense of community, the pope wrote in the preface to a new book about Vatican diplomacy.

The Italian-language book, "Pontifical Diplomacy in a Globalized World," features a collection of speeches, messages and essays written by Cardinal Tarcisio Bertone, who ended a seven-year term as Vatican secretary of state Oct. 15.

The new secretary of state, Archbishop Pietro Parolin, was scheduled to take up his post Nov. 15 after spending a month recovering from surgery.

In the preface, Pope Francis said Cardinal Bertone offered "generous and faithful support" to retired Pope Benedict XVI, and "his calm and mature experiences as a servant of the church helped me, too, after I was called to the See of Peter from a faraway country."

Vatican diplomacy, the pope said, is unique because it combines a high level of foreign relations expertise with pastoral service, which is why Vatican ambassadors are archbishops.

Repeating his belief that the global financial crisis was spawned by a "profound crisis of convictions, values and ideals," Pope Francis said diplomats have an opportunity to renew their art by bringing values back to international relations.

The goal, he said, is "to move the human family toward a future that doesn’t just speak the language of peace and development, but is able concretely to include everyone, ensuring no one is left on the margins."

"A renewed diplomacy means new diplomats," who are able to promote a sense of community on an international level, he said, "breaking the logic of individualism, unfair competition and a desire to dominate, promoting instead an ethic of solidarity able to replace the logic of power, which has become a mode of thinking to justify the use of force."

Vatican diplomacy can help, he said, because it "works to renew the moral dimension in international relations, that which allows the human family to live and develop together without becoming enemies of one another."

Pope Francis said "the most important right of a people or an individual" is being able to realize one’s aspirations "effectively and completely."

"It is not enough to avoid injustice, if one does not promote justice," he said. "It’s not enough to protect children from being abandoned, abused and maltreated if you don’t educate the young to love human existence in all its different phases, if you don’t give families all the resources they need to fulfill their irreplaceable mission and if you don’t promote, throughout society, an attitude of welcoming and loving the life of each one of its members."