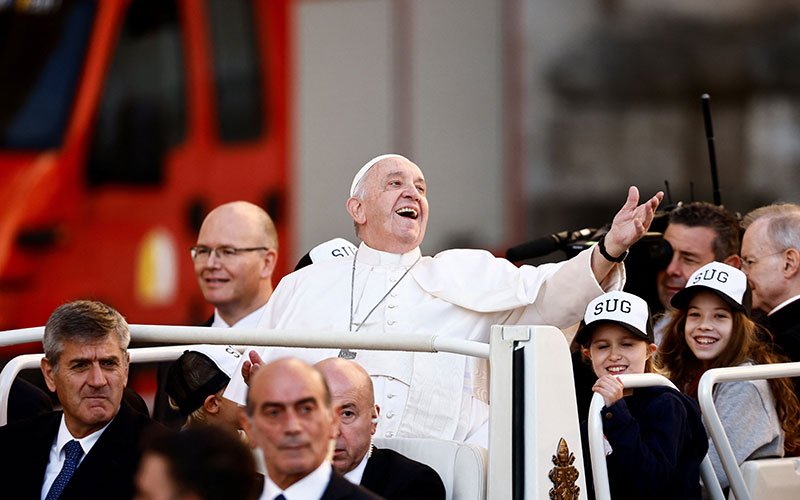 Pope Francis greets the crowd during his general audience in St. Peter's Square at the Vatican Oct. 19, 2022. (CNS photo by Yara Nardi/Reuters)

VATICAN CITY (CNS) — Reviewing one’s life is an essential step in discerning God’s call because it helps one see places where God was at work, even in small things, and also helps one recognize “toxic” thoughts of self-doubt, Pope Francis said.

A daily review of one’s actions and feelings is not mainly about acknowledging one’s sins — “we sin a lot, don’t we,” the pope said. Instead, regularly reviewing the day educates one’s perspective and helps one recognize “the small miracles that the good God works for us every day.”

Seeing God at work in the small things

At his weekly general audience Oct. 19 in St. Peter’s Square, Pope Francis continued his series of audience talks explaining the key steps in spiritual discernment, focusing on how a daily practice of review and introspection trains a person how to look at the bigger picture of his or her life in order to discern God’s call.

Learning to see that God was at work even in small things, “we notice other possible directions” that can be taken and that “strengthen our inner enthusiasm, peace and creativity,” the pope said. “Above all, it makes us freer from toxic stereotypes,” such as thinking, “I am worthless” or “I will never achieve anything worthwhile.”

Pope Francis said he once knew a person who others described as being worthy of receiving “the Nobel Prize for Negativity,” but finally he encountered someone who forced him to say something positive about himself every time he voiced a self-criticism. “Little by little, it helped him to move forward, to read his own life well, both the bad things and the good things.”

“We need to read our lives,” the pope said, and “see the things that are not good but also the good things that God sows in us.”

So many things that happen in one’s life seem unimportant at first, the pope said, but when put together and examined for how they bring one peace and joy, or sadness and agitation, they turn out to be important clues about the direction God is calling one to follow.

“Stopping and acknowledging this is essential to discernment,” he said, because discernment involves “gathering those precious and hidden pearls that the Lord has scattered in our soil.”

Discernment, Pope Francis said, “is the narrative reading of the consolations and desolations we experience in the course of our lives. It is the heart that speaks to us about God, and we must learn to understand its language.”