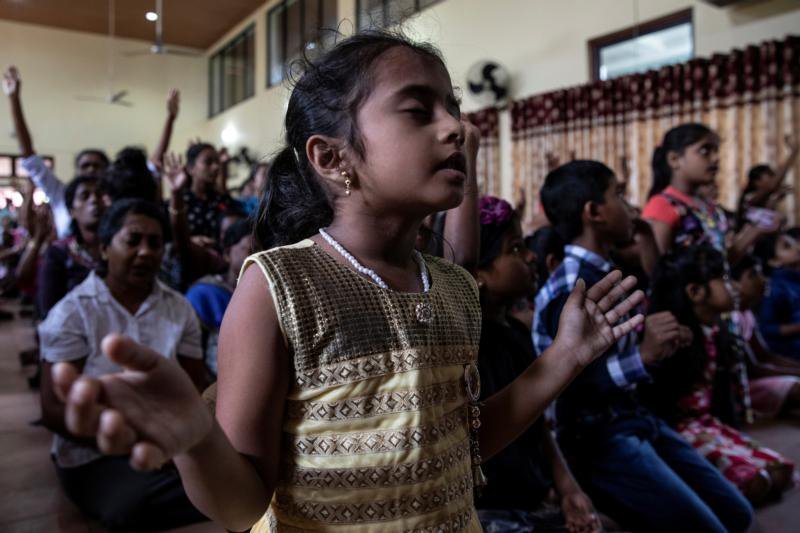 A young member of Zion Church, which was bombed on Easter Sunday, prays at a community hall in Batticaloa, Sri Lanka, May 5, 2019. (CNS photo by Danish Siddiqui/Reuters)

VATICAN CITY (CNS) — In the wake of deadly Easter terrorist attacks on Sri Lanka churches and other sites, Pope Francis condemned the brutal killings and called on all Sri Lankans to strengthen efforts to foster peace and justice.

More than 300 people were killed and more than 500 injured in Easter attacks on three churches and three hotels in Sri Lanka in the latest in a string of bombings by extremists.

The pope sent his condolences and prayers in a letter that was read May 5 at the end of a televised Mass celebrated by Cardinal Malcolm Ranjith of Colombo. The cardinal had asked that all public Masses and services be suspended until there was a better assessment of the security situation.

“In the wake of the brutal attacks on Christian communities,” the pope wrote, “I feel moved to assure you once more of my profound solidarity and my continued prayers for all those affected by these contemptible crimes.”

“With the followers of all religions, and men and women of goodwill everywhere, we express horror at this unspeakable offence against the holy name of God and I pray that hearts hardened by hatred may yield to his will for peace and reconciliation among all his children,” he said.

The pope said he was praying for all those affected, asking that there be healing for the injured and consolation for all those who lost a loved one.

“Conscious of the wound inflicted on the entire nation, I likewise pray that all Sri Lankans will be affirmed in their resolve to foster social harmony, justice and peace,” he said.