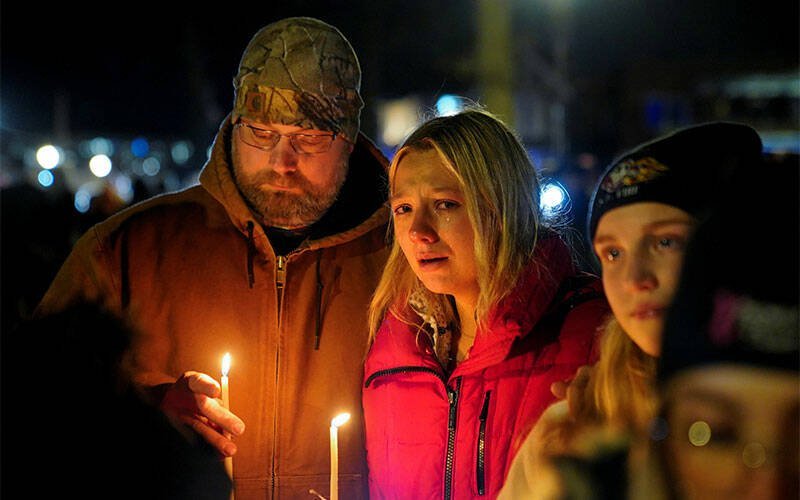 Maddi Maederer, 18, cries during a candlelight vigil in Waukesha, Wis., Nov. 22, 2021, the day after a car plowed through a Christmas parade in the city. (CNS photo by Cheney Orr/Reuters)

VATICAN CITY (CNS) — Pope Francis expressed his condolences to the victims of a tragic attack at a Christmas parade in Waukesha, Wisconsin, that claimed the lives of six people and left dozens injured.

In a message sent by Cardinal Pietro Parolin, Vatican secretary of state, to Archbishop Jerome E. Listecki of Milwaukee, the pope assured “his spiritual closeness to all affected by the tragic incident that recently took place in Waukesha.”

The pope “commends the souls of those who died to Almighty God’s loving mercy and implores the divine gifts of healing and consolation upon the injured and bereaved. He joins you in asking the Lord to bestow upon everyone the spiritual strength which triumphs over violence and overcomes evil with good,” said the message released Nov. 23 by the Vatican.

Authorities said Nov. 22 that five people died when a red SUV broke through a barricade about 4:39 p.m. local time and drove down the street on which the parade was taking place. A child, hospitalized after the attack, died Nov. 23.

A video posted on the website of the Milwaukee Journal Sentinel showed an SUV speeding down the street between parade participants and spectators either sitting or standing on the curb.

More than 60 people, including 18 children, were injured in the attack, authorities said.

Police took Darrell E. Brooks Jr., a Milwaukee man with a criminal history, including numerous violent felonies, into custody. According to The New York Times, authorities said Brooks left the scene of a domestic disturbance before the attack and is currently facing five counts of intentional homicide. News of the sixth death came after the charges.

The parade is one the city’s biggest and most beloved annual events, drawing viewers and participants from throughout southeastern Wisconsin.